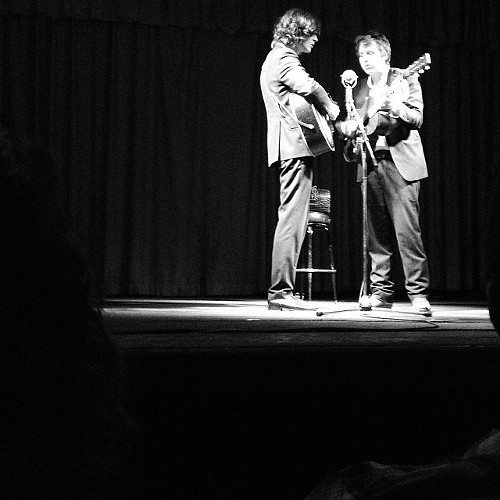 The room was very quiet as I walked sort of clumsily through the crowd to get to the bar. Brian Wright was doing a solo acoustic set onstage, and he sounded terrific, but I needed libations. The Milk Carton Kids were headlining.

I ordered a Dale's and the guy next to me cranked his head around immediately.

"What the hell?" He turned back to the bartender. "He'll drink a Maker's. A double."

He was right. The Milk Carton Kids embody a certain American aesthetic that only a fine bourbon can really nourish in a live setting. There were rows of chairs bedecking the floor of the Beachland. When they do that, they mean business. The performance, the intimacy of the music, every little touch mattered. Of course, the handkerchief that Kenneth Pattengale ties around the neck of his guitar would serve as the primary example of the Milk Carton Kids' dedication to The Show.

"You heard this guy? Brian Wright?" I told the man I hadn't but that he sounded great. As I walked back into the ballroom, Wright was firing up Woody Guthrie's "The Biggest Thing That Man Has Ever Done." Dude aced it.

Everyone sort of rustled around the ballroom during intermission, and people sprawled across the seats in the middle, likely saving them for loved ones who had disappeared into the bathroom or outside for a smoke. I ordered another whiskey and ambled toward the back. When the lights dimmed, everyone seemed to run back to their seats, tripping over the aforementioned sprawlers and firing up smartphones for photos.

The Milk Carton Kids - the gentle acoustic duo of Kenneth Pattengale and Joey Ryan - maintain a reverie during their live show. Pattengale tends to juke around a bit and contrate Ryan's steady pose. They shared an old-timey microphone, which differed from the two-mic setup they've sported in the past. Throughout the show, they were extremely physically close and often seen exchanging encouraging glances or knowing smirks. The solitude of everything was broken only when some doofus began talking/yelling out in the hallway. We all craned our necks to give him "the glare" through the windows of the doors, but this guy was totally oblivious. When he eventually walked in to the show, husbands nudged wives and pointed at the monster: "That's who was, like, screaming out there." Later, somebody arced an empty bottle into a nearby trash can, which then crashed into all sorts of glass detritus. Against the sounds onstage, the crash was deafening. The guy shrugged meekly and pulled out his phone.

The highlights of the show were numerous, though. I mean, these guys can really write a song. "Michigan," for instance, is just about the most mesmerizing song I've heard in the past few years. They nailed it last night. And Pattengale's "Memoirs of an Owned Dog" was crestfallen and astounding.

Similarly, the band's stage banter was simply top-notch. There was a great bit about how most of the setlist comprised songs written by Pattengale, so fans of Ryan would likely be upset. Later, Ryan said they had been writing a lot about places, but that "Cleveland" didn't really rhyme with anything good. One gentleman shouted out "Believeland!" to which Ryan replied, "See what I mean?" They both have a very dry wit, which plays off so endearingly well against their music.

Ryan told Scene a few weeks ago that the goal between the two of them is to be known as a road band. Last night bore that out. Their studio stuff is - duh - terrific, but it's their live show (sold out last night and at nearly every other venue they're playing this spring) that showcases their capabilities.

In sum? It was a wonderful show, and the bourbon really hit the spot.