Nothing too fancy. That’s the best way to describe singer-songwriter Jack Johnson’s approach. The guy’s sparse, often-acoustic songs have lullaby-like qualities to them (and they were even used in the soundtrack to the kids’ flick 2006 Curious George). Despite their seeming simplicity, the songs have caught on with a generation of young listeners that often gravitates toward much flashier stuff. So it was remarkable to see Blossom packed to the gills last night for Johnson’s concert. The guy didn’t disappoint either. He mixed things up enough — switching from acoustic to electric guitar throughout the night — to remain engaging. 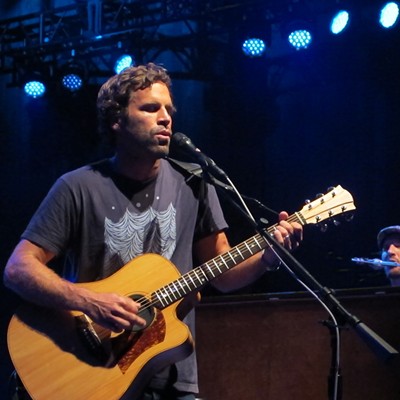 Dressed in jeans, a T-shirt and flip-flops and sporting a deep dark tan (living in Hawaii will do that to you) the lanky surfer-turned-singer-songwriter didn’t do anything too complex with the stage design. Pieces of what appeared to be driftwood hung from the ceiling and a few spotlights flicked on and off in conjunction with the music. Images of waves (or was it sky?) flashed behind the band over the course of the two-hour set. It was all the stage design the guy needed. Sparse songs such as “Flake” and “Never Fade,” a song about Johnson’s wife, worked because their simple melodies were simply so memorable.

And best of all, Johnson appeared to be truly having fun. He snuck a few snippets of the Cars’ tune “Just What I Needed” into “Sitting, Waiting, Wishing” and later in the set he played the opening notes of Led Zeppelin’s “Whole Lotta Love” as an intro to “Staple It Together.” During “Tape Deck,” a song about the punk rock bands he played in when he was a teenager, he related a story about the day he first met keyboardist Zach Gill, a helluva singer in his own right, and how the two played in rival bands for a short time. He said they regularly competed to see which band could attract the bigger audience. By set’s end, he had the audience singing in unison to the show’s closing tune “Good People.” And at the start of the encore, he humbly thanked the audience for attending the gig in such a way that showed just how genuine he really is.

Led by manic frontman Alex Ebert, openers Edward Sharpe and the Magnetic Zeroes started the night off with a vigorous 45-minute set of jangly indie folk that had audience members on their feet, especially during the infectious “Home.”