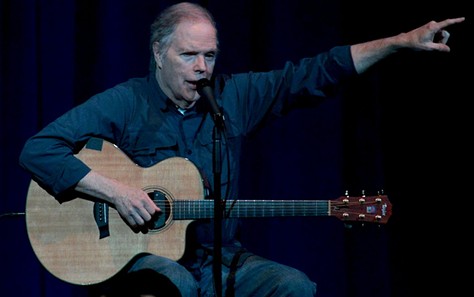 There’s something very Garrison Keillor-like about fingerpicking folk singer-guitarist Leo Kottke. With his faded blue jeans and hiking shoes, Kottke, who performed the second of two weekend shows last night at Music Box Supper Club, dresses like a guy who might be heading to work on a farm. And like Keillor, he likes to tell stories. Lots of stories. Not that his tendency to ramble took anything away from his terrific strumming. The two worked well in unison last night, suggesting the extent to which the 69-year-old Kottke is an important musical artifact. He's a veteran showman who should be treasured.

Though he began the 90-minute concert without saying word, that in itself would become a joke of his. “I should have said something before I started playing,” he quipped. “But not ‘Hello Cleveland.’” Kottke then introduced “The Fisherman” with a lengthy story about his grandmother whom he said was “the angriest fisherman I’ve ever seen.” “I learned not to get in a boat with her,” he laughed as he launched into the brisk folk melody that he played on an acoustic guitar. The momentum from that tune carried into “Julie’s House,” which he described as “a true story, depending.” The song almost had a calypso feel to it.

Mid-show, he switched to 12-string guitar, which provided an even better showcase for his guitar playing ability as he played it both with and without a slide. “Gewerbegebiet,” a song he introduced by saying “the Germans did for the consonant what the Hawaiians did for the vowel,” featured a beautiful jazzy melody that made it one of the highlights of the concert. He sprinkled stories about the late guitarist Joe Pass and the Mahavishnu Orchestra, with whom he toured in the ‘60s, into his set. And when someone in the crowd yelled out “Free Bird” as he arrived on stage for a one-song encore, Kottke had a respronse ready. “Michael Hedges took the trouble to learn that song,” he said, adding that he would have liked to have played with Lynyrd Skynyrd but "it would be a little loud for me now.” That’s just like Kottke to have the last laugh.