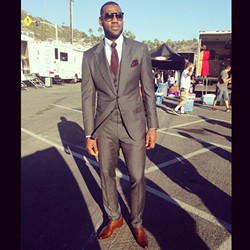 Photo via KingJames, Instagram
In-between launching a new television game show, helping the wifey with a new juice shop, welcoming his third child, and, oh, playing for the Cavs, LeBron James has planned and produced an NBA-themed fashion show, slated to take place on New York City catwalks this weekend.

The gist of the show is this:

NBAers such as James Harden, Klay Thompson, Chandler Parsons, and others will showcase three rounds of attire: boardroom getup, what to wear on a night out, and what to where to the big game. After each round, a panel of judges will ax a handful of participants and advance others until a winner is picked.

The MC? Shaq, of course.

It all goes down on Friday night at New York's Hammerstein Theater and will air on TNT at 6:30 p.m. on Saturday.