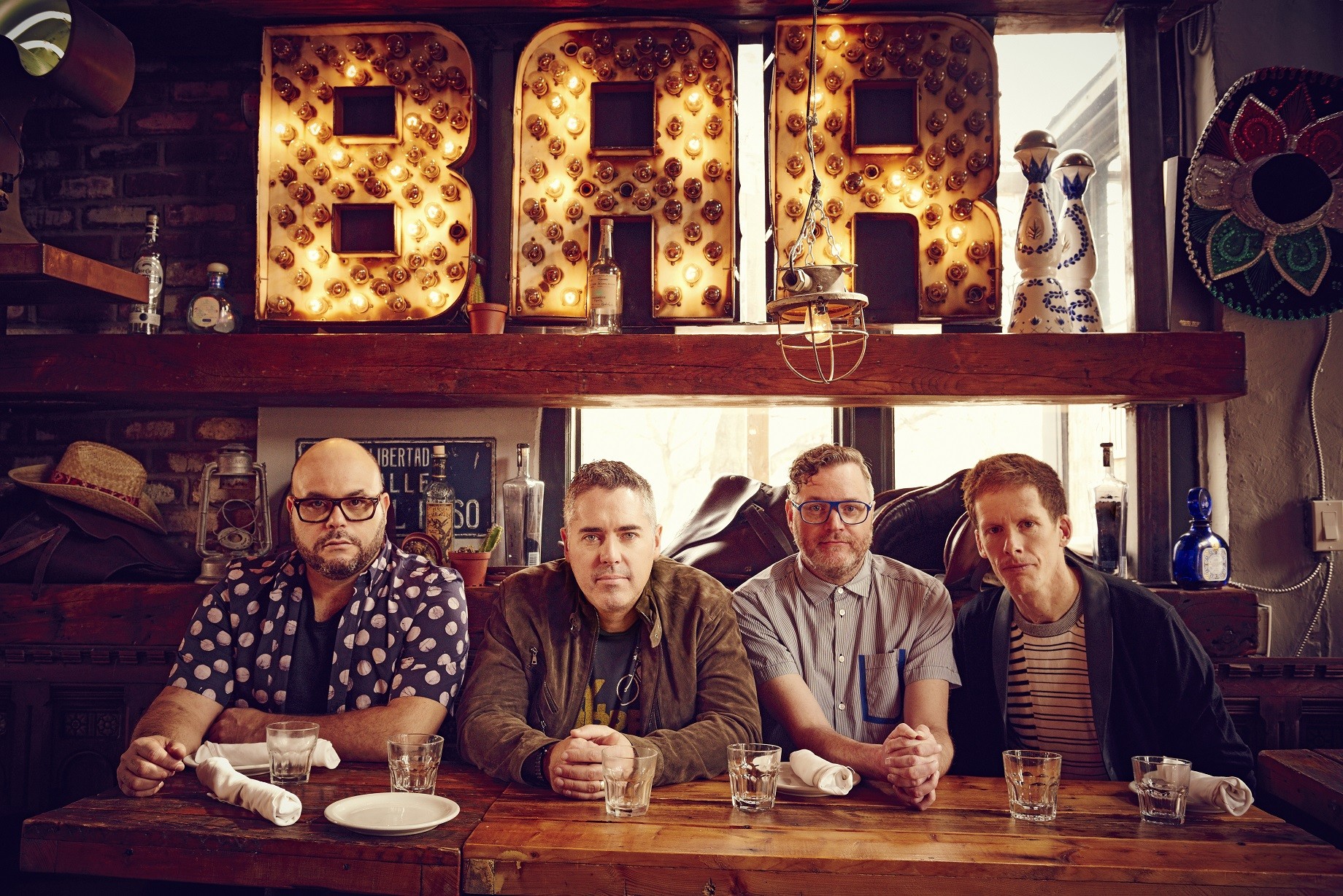 The last two Barenaked Ladies albums, 2010’s All In Good Time and 2013’s Grinning Streak, have featured cover artwork highlighting the band members in a rather stoic pose. The cover art for their new album Silverball has a pinball-driven theme that seems ideal for vinyl. As drummer Tyler Stewart told us during a recent phone conversation, the graphics will indeed find their way to wax.

“I think it’s a victory for Barenaked Ladies whenever our pictures aren’t on the cover,” he says in talking about the cover art. “It’s like, ‘Wow, it’s so much more appealing when we don’t see you guys.' But yeah, the pinball-inspired stuff, it’s amazing how pinball insinuated itself into this record. Because really the only obsessed guy is Ed Robertson, our lead singer.

“The rest of us have respect for pinball — it’s not like we hate it or anything, but he’s fully obsessed,” he continues. “He now has, I guess, probably 15 machines in his home. He’s hooked up with a group of guys, fellow aficionados who are now in a rotating [schedule] — they’re going to swap machines every couple of years or couple of months or whatever. Which is really a neat thing too.”

“I think there’s an appreciation now, for the slightly less slick things, more tangible with moving parts,” he says. “Because everything we get these days is so streamlined and technologically advanced. It’s nice to step back once in a while and appreciate the simplicity yet wonder of earlier machines.”

Silverball is the 14th studio album release for the Ladies, and this year the band marks 27 years as a performing unit. Stewart has been behind the kit for 25 of those years.

“The 25 years, when I look at it, it’s like over half of my life. I’ve been in Barenaked Ladies in my life longer than I haven’t been,” he laughs. “And that does freak me out. You as a fan, as you say, thinking back maybe to the first time that you saw us, or the first time you heard our music and it just sort of became part of your life and away we go. Then cut to us going, ‘Wow, that song is 24 years old or 25 years old and can we still even play it?’ We’re not necessarily the same guys — but that’s the beauty of art and music is that it’s this touchstone to who you were and who you are, because you still have to put your whole being into the music. You know, you play a song like ‘Blame It On Me,’ which was on Yellow Tape and also on our first album, Gordon, I get as much satisfaction out of playing that every night as I do any of our new tunes. That to me, it is a bit of a marvel, it’s like, ‘Holy crap, where did the time go?’”

The band is three albums removed from the departure of singer Steven Page, who once shared lead vocals with Robertson, and Grinning Streak was the sound of a band that was finally starting to feel comfortable in its own skin again with the revised lineup. Silverball is the album that according to its members, completes that evolutionary cycle. Robertson has described the new release as one that would “indicate the reality that Stella had indeed got her groove back.”

“Going in, it’s not necessarily the goal to prove ourselves again, because in some respects, I think every artist has to prove themselves every time they put out a record, whether they want to or not,” Stewart says. “The media and the fans are like, ‘Have these guys still got it?’ But for us, I think this time was something that we looked forward to. I know that Ed has said to us and also he’s said it in the press to that it was his most stress-free writing experience. He went away to his cottage by himself to write, thinking that he would come up with some ideas and he came out with like 15 songs that were either finished or almost finished. We were like, 'Holy shit!' That’s pretty prolific.”

Band members now have learned to “trust each other implicitly,” making the studio experience an effortless one.

“We trust each other with the material that’s being brought to the table and then we trust each other in the studio,” he says. “This time around, we kind of had to make the album in a short time frame, because [keyboardist] Kevin [Hearn] had to go and get some treatment for some tongue cancer that happened with him. He’s a cancer survivor — in ’99, he battled leukemia and successfully won and this time, he had a little bout of tongue cancer, which he had removed and treated, but it started while we were making the record. So he was contributing, even though he was about to undergo treatment. We kind of had this compressed window, and I think what we all realized was that, ‘Wow, we can do this.’ Even if we’re under the gun and also, let’s do it for our man Kev. Let’s make sure that we get a great record and that he’s totally represented. You never think, ‘Just in case,’ but I think that’s probably looming there like, what if anything goes wrong? But luckily, his treatment was totally successful and he’s back with us and dare I say more on it than ever. He really seems to be into it and contributing and happy, which is great. That’s the longest answer in the world to a simple question, but we’re in a great place. We’re in a really united and together place.”

Silverball is a typically energetic and diverse set of songs from the Canadian music veterans and Stewart loves the opportunities that are in front of him in the studio that allow him to color outside of his normal drumming territory.

“I love being able to sing in this group. It’s so much fun. I’ve been singing a lot more since Steven left the band and I really enjoy that,” Steward says. “I think the band in general too has kind of been more committed to group vocals and things like that. So what a pleasure [it is to have that opportunity].”

He also points to producer Gavin Brown (who also worked with the band on Grinning Streak) as an important addition, someone who as a fellow drummer brings additional elements to the table. “We’ve always had guys around who kind of encouraged that rhythmic element and I think it sure helps the songs with a little bit of swagger and vibe. It’s great to work with drummers.”

The band returns to Cleveland for the opening date of their annual Last Summer on Earth tour and Stewart says they’re looking forward to touring with Violent Femmes and former Men at Work frontman Colin Hay. The Femmes, as Stewart points out, have created a catalog of songs that get under your skin and become a part of your DNA, as he terms it and “are responsible for some incredible moments that are defining moments in your musical journey and in your life.”

This is their first time touring with Hay, but as Stewart recalls, they’ve heard from promoters for years that, “You guys would like Colin Hay — Colin Hay is like you guys.” He points to Hay’s tendency to tell stories between his songs, a similar staple in the band’s shows, and explains further, “His songs have a whimsy and a sense of humor in them that obviously Barenaked Ladies have shared over the years.”

With that sense of humor fully intact, it seems like a surefire thing that Barenaked Ladies will present another evening of music underneath the stars at Jacobs Pavilion the site of quite a few memorable BNL shows in the past which will be one that you won’t want to miss.