It's Yet to Be Seen if LeBron Will Raise a Banner in Cleveland, But He's Already Delivering a Winner to Akron Kids 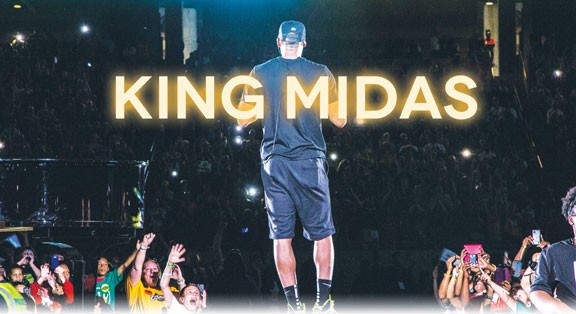 Gabrielle Briggins tries to hold back tears, to no avail. Minutes earlier, her daughter Shavelle received a Samsung Galaxy tablet as a door prize from the LeBron James Family Foundation (LJFF) at one of its monthly Hometown Meetings, which rotate among schools.

Shavelle's been in the LJFF Wheels for Education program four years now. It has helped her bring up her grades and so much more. In addition to the tablet for her daughter, Briggins was informed this April afternoon that her family also had won $1,000 in groceries from the Foundation, an incomprehensible stroke of luck for a mother of three just trying to get by.

"It's very inspirational. We love LeBron and the Foundation," Briggins says before rhapsodizing about the changes she's seen in her daughter. "She's more outgoing, more outspoken, she participates more. It's great. They listen to [LeBron] better than they do us."

At a table nearby, a boy puts almost half his arm into one of LeBron's sneakers and a little blond girl named Zoe, sporting a braided ponytail and glasses, twirls in a LeBron James practice jersey that nearly reaches her knees. She could be the flower girl for a Cavaliers-themed wedding as she spins about the Jennings CLC cafeteria like a reeling top.

Her father, Chris Fassnacht, is a teacher at Harris Elementary and coached against James in football more than a dozen years ago. He's amazed at the impact her participation in the program has made in just a year.

"After the summer classes, she was reading so much better already and she's been making merit and honor role this year," Fassnacht says, noting how much LeBron's personal touches, like letters and phone calls, mean to these kids. "Just seeing her work so hard and then when there is a letter that comes in the mail from him ... she loves getting those letters from LeBron. He sent ice skating tickets and they went on the Polar Express."

The gifts and memorabilia are just a small part of the LJFF's Wheels for Education program, the Akron charity LeBron started in 2003, during his first year in the NBA. And while it was active while James started his career with the Cavs, it finally found its focus, ironically enough, after James left for Miami.

"That year I always say was the best thing that ever happened as far as the Foundation," says Michele Campbell, LJFF's executive director. "Because it was during those struggles in those times when he was alone, away from his support network from home in Miami, that he really learned what he wanted this foundation to do and to be and how he wanted to use his influence to move a community."

He may have been a thousand miles from home physically, but his heart was back there. He realized his greatest desire was to help the kids in his hometown, the ones who face the kind of struggles that LeBron dealt with growing up.

For example, James missed over half the school year during fourth grade as he and his mother Gloria changed residences and school districts several times.

When he discovered that nearly a quarter of all students in Akron public schools never graduate, he set out to do something about it.

"He said we needed to fix that," Campbell recalls. "For these kids to be successful and live out their dreams, they can't do that without an education."

For all the rosy forecasts that greeted his return, it's these more subtle ways in which James has touched Northeast Ohio that are likely to have the most enduring impact. It's not just because an athlete's star burns brightly for only so long, but also because predictions of economic booms from successful sports teams inevitably fail to match the initial fanfare.

That didn't stop civic leaders and so-called experts from throwing around grandiose figures with zero evidence. Former Cuyahoga County Executive Ed FitzGerald predicted a $50 million windfall from LeBron's return, and John Carroll economics professor LeRoy Brooks suggested a ridiculous $500 million regional economic boom, which he later revised down to $162 million. Even the Plain Dealer got in on the game back in 2010, guestimating a $200 million increase in downtown spending thanks to No. 23.

Sure, downtown businesses might see a bump, especially those within a very close radius to Quicken Loans Arena, but Northeast Ohio? Economic studies have failed to show any real regional economic impact of sports teams more often than Austin Carr says, "Get that weak stuff out of here."

"It really depends on what you define as your area of economic impact," says Victor Matheson, economics professor at Holy Cross and a respected connoisseur of economic impact studies. "Without question LeBron is great for that economy within a mile or half mile radius of the arena, but ... you have to decide: Are we having a gain for [downtown] Cleveland coming at the expense of Shaker Heights?"

This is what's known as the substitution effect. Since most of the spending spurred by the Cavaliers' success comes from residents of Northeast Ohio, it's usually simply money they'd spent elsewhere in the community. Factor in the costs of policing, maintenance and concessions to the arenas and their teams, and it winds up a wash economically.

LeBron's Cavaliers reunion is unlikely to spark a substantial or even measurable macroeconomic impact; however, that doesn't mean the Prodigal Son's return isn't playing an important role in Northeast Ohio's ongoing renaissance.

His presence alone can have a kind of halo effect. A winning team means plenty of glamour shots of the city beaming out to millions on every national broadcast, helping burnish the reputation of the Mistake by the Lake. That can be important for a region trying to stem/replace population loss and convince the best and brightest this is the place to raise their family.

"People see [on TV] that it's a pretty cool place," says Cavaliers CEO Len Komoroski. "And it's helping to change the dialog and perceptions of Cleveland as a city in a very favorable way."