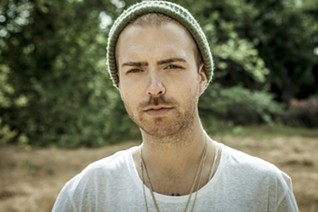 Marina Chavez
Hall
Two years ago, amid a soaring and still-burgeoning music career in the States, Trevor Hall packed up and took off for India. He traveled the country for a long time under the tutelage of a classical Baul musician (a Bengali minstrel, to the uninitiated).

If they hadn’t been cemented already in his music, the cultural strains of Eastern thought sunk deep into Hall’s work. Baul culture, in particular, noted among UNESCO’s Masterpieces of the Oral and Intangible Heritage of Humanity, espouses a life lived in the present moment. Their music is not written down, and their songs refract the nuanced meanings of life through proclamations about the heart, the soul, the Earth.

Hall learned a lot while on his pilgrimage and returned to remote posts in Vermont and Maine, where he inadvertently spilled the contents of his travels into Chapter of the Forest, a breakthrough album released in June 2014.

“Before Chapter of the Forest, I had kind of reached a point where I was really burned out,” Hall says. “I just hit a wall. I had been touring since I was 16 years old; it was non-stop. That was the first time in my career where I stopped. I needed to be in one place for more than two weeks.”

India loomed. As he traveled the subcontinent, he wasn’t planning on writing a new album. He was there to learn, to follow the Baul path laid out before him.

Regardless, the seeds had been sown.

What followed was what Hall calls “an act to heal himself,” a true deep dive into self-expression. He says now that he stumbled onto his own voice for the first time as these songs poured over the oceans and into the studio.

“As musicians we change constantly, but [my earlier album were] just a foundation,” Hall says, looking back at a career that began in 2003 or so. “With Chapter of the Forest, it grew into a space. I was like, this is the album that most feels like me. That was so refreshing to me.”

The sounds on the album are very much in the vein of “world music” — tablas bouncing rhythms against sitars and Hall’s deep, airy vocals. There’s reggae in there, sure, and a dose of hip-hop, but it’s a sound wholly crafted by Hall and his personal journey. Sonically, his music would fit in as nicely on a summer porch in Cleveland as on the midday train from Kolkata to Dhaka.

Earlier this year, Hall released Unpack Your Memories..., a five-song EP that serves as the bridge between Chapter of the Forest and his upcoming Kala. It’s gentler — and its roots are more varied than those of its predecessor album — but it still carries the growing sound of Hall’s present-day music.

“This album is totally different than everything that came before it,” Hall says. The songs span the course of the previous five or six years — stuff that was written in slow, meditative, intimate moments. This was the internal Trevor Hall, the music and messages that he hadn’t felt prepared to share with the world until now.

And the songs on Unpack Your Memories… were, for the first time, recorded solo: just Hall in his bedroom with a mic and a guitar. The music that appears on the EP comes straight from Hall’s original demos.

The title track on the EP, for instance, takes the same vibe of Chapter of the Forest and strips it down to the barest essentials: strings, voice and raindrop percussion.

Nowadays, Hall sums up his music as a mix of acoustic rock, reggae and Sanskrit chanting, acknowledging his international and historic inspirations. It’s a blend that can be traced in some ways back to his childhood, where music was an early constant and where his family boosted his confidence.

He recalls a time when he found a harmonica in the drawers at his childhood home — an old instrument once played by his father. Almost immediately, Hall took a liking to playing the harp; his dad invited him to come down and play with him and his band. It was a momentous occasion, and a good bout of foreshadowing.

But despite the thrills of the stage, Hall recognized that there was something more to music that was calling him.

His early songs revolved around the girls he liked or surfing. Now, more than a decade later, Hall spends his lyrical energy on questions about the human condition, on awareness of our station in the universe.

Those messages are a major part of the trilogy under way and of his current summer tour. For our part, Hall is looking forward to his two-night stand in Cleveland; he played the Music Box in October 2014 and loved it.

“When we arrived — that show, I remember, was one of the best shows we had on that tour,” Hall says. “That place and the energy and people that came were just so amazing. And also the space provided such a good platform for us to share stories and really have a good listening room. When we were kinda setting up this year’s tour, I said, hey, we really have to go back to that place.”

Among all of his travels, Hall has found that performing music on a simple stage in front of attentive people is one of the great joys in his life. He has stories he wants to share. Music, of course, is a great vehicle, and music is really just a form of storytelling.

One thing that Hall enjoys is calling audience members out and asking them how they’re doing. He does what we can to remove the space between the performer and the listeners. And so he talks and shares stories about how the songs were created or about the things that are happening around him.

The present moment, he says, is a lot of fun.