What Would Jesus Sing?

If he'd been a waning hippie in 1970, it might have sounded like Godspell, now at Cain Park 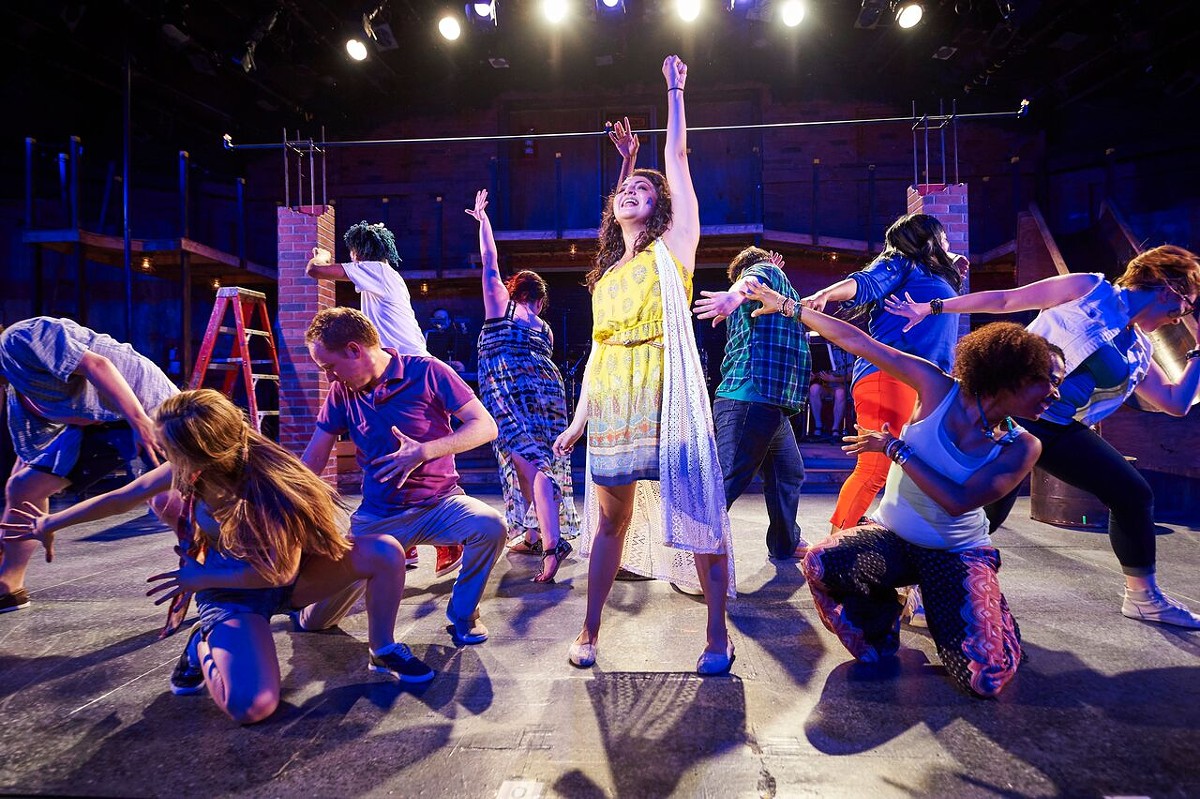 If you weren't around in 1970, you may not be aware that a couple college kids co-opted some Bible lessons, framed them in contrast to famous philosophers from Sartre to Buckminster Fuller, then wrote contemporary music to let it all slide down easily. They called it Godspell, and began a very durable theatrical franchise.

As conceived and originally directed by John-Michael Tebelak, this show consists of biblical parables and the lyrics of hymns set to rock and pop melodies. And it never seems to wear out its welcome, since it's been around for almost half a century. Many people never tire of it, probably because of the infectious energy with which it is usually presented.

Some naysayers might call it "spiritual Gruyere" (slightly pretentious cheese for the religiously inclined), or a cult training workshop (the wild-eyed devotion to a single individual's every utterance, even Jesus Christ's, can begin to feel a tad creepy at times). But naysayers be damned! (Not literally, of course.) This staging of Godspell at Cain Park's Alma Theatre offers plenty of enjoyment along with the bite-sized nuggets of behavior tips gleaned from the Gospels of Matthew and Luke.

It's essentially a loose jumble of scenes that glide from one pearl of saintly wisdom ("If a man steals your shirt, give him your coat") to another ("Whoever hits you on the cheek, offer him the other also"). But once the simple lessons are put to the infectious music of Stephen Schwartz, it all takes on a patina of youthful innocence and universal love. We'll leave our cynicism at the door, and pick it up again on our way out.

Co-directors Ian Wolfgang Hinz and Joanna May Hunkins throw everything into this mix — from audience participation via Pictionary and charades to non-stop running and dancing choreographed by Katie Nabors Strong. With some of the performers slipping down a half-pipe slide and dropping down on a fire station pole, the air is filled with smiling, amped-up performers who act out the parables with a clever, faux-improv feel-good vibe. Along the way, some of the stories are so inventively presented, they get a bit lost in the muddle of hyperkinetic staging.

It's all led by Warren E. Franklin III as Jesus, clad in a "We are a Colony" T-shirt, in honor of Jim Brennan, the popular owner of Brennan's Colony tavern in Cleveland Heights, who was murdered one year ago in a robbery. Franklin is lean, limber and charming, with a warm singing voice. But his projection fades at times when speaking dialogue.

Each of the actors playing his apostles delivers stirring performances at times, even though they all wear pretty much the same Heaven's Gate, true-believer grins from start to finish.

Among them, Douglas F. Bailey II generates some down-to-earth Jack Black-ish laughs; elegant Treva Offut nails the mellow "By My Side"; and Eric Fancher pumps a lot of zazz into several of his characterizations. Scott Esposito lends his powerful baritone voice to the role of Judas, and Colleen Longshaw and Fancher provide a reliable vocal foundation for show-stopping numbers such as "Bless the Lord" and "We Beseech Thee."

Jade McGee turns in a rousing version of "Day by Day," and Ellis C. Dawson III (rounding out a cast heavy on generational suffixes with Roman numerals) has fun with "All Good Girls." BJ Colangelo gets the second act off to a sultry start, slinking around with a white boa in "Turn Back, O Man," while perky Ashley Bossard rounds out the ensemble.

True to all Godspell productions, this one features a lot of audience contact: touching shoulders, shaking hands, and dancing in the aisles. It's all about bringing everyone together as a sharing community of equals. Of course, that is essentially impossible, since there is a definite difference in our participation in that space. To wit, some of us purchased tickets and others are being paid (even if minimally) to perform. You can chart out those power dynamics on your own, if you care to.

Still, it's a sweet thought and it's ultimately hard to resist the calories these actors are expending, supported by an able crew of musicians under the direction of keyboardist Jordan Cooper. And why bother trying to resist? After all, as some say, a religion is just a cult with a century or so of history behind it. So relax, take in the selfless and generous messaging (really, give him my coat too?), and ride the wave of these reliably enjoyable tunes.