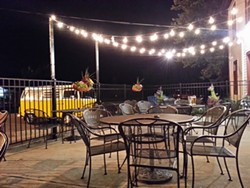 Last October, Westlake's Dover Gardens Tavern made headlines after a driver lost control of a stolen pick-up truck and drove it into the side of the building, injuring 12 people and causing so much damage to the restaurant that owner Gary Hurst was forced to close.

Fast forward 10 months and the 27-year-old reckless driver is now serving 35+ years in prison for his involvement in the crash and a slew of other charges. Hurst, on the other hand, is gearing up to officially re-open his restaurant.

Kaylee Remington of the Morning Journal reported this week that construction is underway on the Detroit Road building. “They’re currently in there doing the foundation work, the flooring; that kind of stuff,” Hurst told Remington. “Then we will be getting to the bar and other sections that have to be rebuilt because of the accident.”

Hurst said he'll have to wait and see if any of his former employees will return for the opening, but that he's currently seeking  others to join his team too.

If the construction progress keeps pace, Hurst said he should be operational by October.