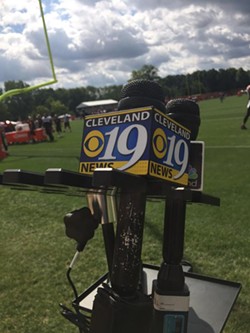 They’ve got a new logo (ish), new colors, and some new faces which the execs, burrowed deep in the basement of their E. 12th St. company headquarters, hope will distract viewers from the preponderance of recent evidence (or at least the perception of same): that Channel 19 has, for some time, been the bottom-feeding local news broadcast, the news you watched to reaffirm your convictions about the death of 21st century journalism.

“Attention-getting,” was the preferred euphemism of General Manager Dominic Mancuso for 19 Action News’ erstwhile tone and style. “Traditional,” and “reflective of Cleveland pride” are what he and news director Fred D’Ambrosi are running with for “Cleveland 19 News.”

The red, all-caps 19 ACTION NEWS logo has been subbed out for a more subdued blue and gold option (view in photo above), which features the classic CBS eye and the italicized “19” that’s been around for ages.

The most significant, visible changes are on the personnel front: Mark Nolan has joined Romona Robinson for the 4 and 6 p.m. news broadcasts. Nolan was the weather guy for Channel 3 back in that station’s mid-aught heydey and he and Romona are old pals.

In fact, the middle half of their first 4 p.m. broadcast Monday was a weird stroll down memory lane. A “reunited” segment featured the co-anchors palling around atop a motorcycle; recounting the one time Nolan traveled to Robinson’s childhood home to eat “chitlins and cornbread” with the Robinsons; and shouting from a rooftop in the Warehouse District, imploring the city to tune in at 4 and 6 p.m.

“Our city is building momentum like never before,” Robinson explained to the viewing audience, before the first commercial break. “We here at Cleveland 19 News are dedicated to covering stories that matter to you. We will champion positive changes in our region and hold people accountable when things go wrong. All above, we pledge to listen to you on all of our platforms and deliver content to help make your lives better. We’re ready to earn your trust and we hope you’ll see the difference as we all work to make Cleveland better.”

The 4 p.m. broadcast led with a breaking update on a gas leak at Legacy Village (all clear), then a short segment on Louis Stokes, before dwelling on the morning’s dismal stock market performance for some time. After the Mark & Romona love fest, the Buzz, and Jeff Tanchak’s weather update, they did a story about the Flats East Bank development, (which, for reference, see here).

Gone is brassy New Yorker Danielle Serino — “[Management] does not feel my style of journalism is consistent with the new format,” she wrote in a note to Facebook fans — and brought on board, in addition to Nolan, are new morning anchor Tia Ewing and early morning / noon co-anchor Q McCray. Channel 5’s new media director Colleen Seitz will join Cleveland 19 News as its director of digital content in September.


@cleveland19news don't like the new graphics package and the lift of @fox8news attitude. Jeff Tanchak is the only reason to watch this mess