Under the big top

Tom Monahan slaps a clipboard onto a long wooden table that runs half the length of his front porch. "We're getting there," he says, gawking from behind a pair of eyeglasses and tossing a ballpoint pen onto the papers. He's talking about gathering thousands of signatures in support of a charter amendment issue for the city of Lakewood. He's talking about saving Lakewood Hospital.

This house where Monahan lives is the house that Dr. C. Lee Graber built in the very early years of the 20th century. The front windows are tucked low into the walls' wooden frames, because Graber's wife, Belle, was an invalid and she liked to sit in her wheelchair and watch the nascent suburb buzz by each day. The city was transforming back then, as it is now.

The Grabers mortgaged their home to open Lakewood Hospital just up the road in 1907, and what was then a 15-bed hub in the center of town soon became a cornerstone for Lakewood, for its culture and legacy. Monahan, a retired Cleveland Press reporter and former assistant safety director in Cleveland, is one of many residents working to keep it that way.

Cleveland Clinic, which operates the hospital, has signaled its intent to close and demolish the hospital and open a $34-million outpatient "family health center" in its place. Despite the finality with which the argument has been framed, representatives at City Hall have insisted that it's just a proposal. Cleveland Clinic operations are conducted via a 1996 "definitive agreement" with the Lakewood Hospital Association (LHA), a private nonprofit that leases the hospital property from the city. The public owns a majority of the hospital.

Because the arc of Lakewood's biggest story in years has become so distorted and divisive, it's hard to say what will happen. In the words of one City Hall staffer, "It's confusing as heck."

Several things are certain, though. This struggle to save or shutter the hospital is changing the city's landscape — its culture and legacy —irrevocably. And while the closure of Lakewood Hospital isn't a done deal per se, it has been discussed publicly as such all year. Documents obtained from the Clinic show that it's been part of a master plan for at least three years. 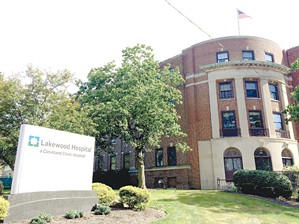 Faced with what they're calling a propaganda campaign, Monahan and his group — Save Lakewood Hospital, several hundred strong across the city — peppered the neighborhoods with petitions that would amend the city charter in such a way as to trigger an automatic voter referendum in the event of any future hospital closure. The seven members of City Council, deeply divided over the hospital issue, unanimously approved the ballot measure. Whether or not council approves the hospital closure plan before the November election remains to be seen.

The opposition is not so much the nostalgia trip it may outwardly seem ­— although, for instance, Monahan's children were all born at Lakewood Hospital, and the building itself remains an iconic symbol for the city. Rather, this struggle is about the bottom line and about civic autonomy. Summers has proclaimed that the new family health center will help make Lakewood the "healthiest city in America." But there's been little accounting for what Lakewood has lost and will continue to lose along the way, and promises of the "healthiest city in America" ring hollow without addressing a litany of other problems that have nothing to do with what operates in that building. But we digress ...

"This is all about money," Monahan says. "So, 'We're going to build our own building and we're going to own it and you can't tell us what to do.' That's the whole nut of this thing. Hey, you guys signed a 30-year lease for this thing, as far as I'm concerned. Honor it."

On Jan. 15 this year, Mayor Summers told his constituents that Cleveland Clinic and the Lakewood Hospital Association would close Lakewood Hospital in 2016 — 10 years prior to the end of long-standing contracts and right in line with the opening of a gleaming, $143-million hospital in Avon. (The Cleveland Clinic has dubbed that new facility a "hospital of the future.") In what was to become a running tagline, Summers insisted in his remarks that "changes in health care" made Lakewood Hospital's 263 inpatient beds and some 1,100 employees outmoded and unsustainable.

Throughout the press conference, the matter was treated as an inevitability. Here's the lead-off sentence, for instance, from the Northeast Ohio Media Group's coverage on that day: "Cleveland Clinic and the Lakewood Hospital Association will close Lakewood Hospital and replace it with a health center by late 2016, officials said today."

But later, City Hall officials began backing away from the finality of it all, describing the Clinic's letter of intent (LOI) as nothing more than a proposal.

On May 31, the Clinic's LOI expired. (Any plan would ultimately need City Council approval — but even after eight months of public vetting, they don't have the five necessary votes.) Still, the letter is a worthy read.

In short, the plan is to dissolve the two anchoring contracts: the lease between the LHA and the city and the definitive agreement between the LHA and the Clinic. A new agreement would be enacted, which would call for the termination of hospital operations and the "wind-down and dissolution" of the LHA. The LHA, created in 1985 by the city to operate a functioning hospital in Lakewood, would pay for its own dissolution, as well as the demolition of the hospital.

Lakewood Hospital in 1956.
Nearly all assets — hospital equipment and otherwise — would be transferred to Clinic ownership, and the city would sell the future family health center land parcels to the Clinic. The leftover 5.7 acres of land would be set aside for the city's future development. "Economic development needs to be our highest priority," finance director Jennifer Pae said, describing the city's goals, in April. The hospital land sits a few blocks east of "downtown Lakewood," a newly revitalized commercial corridor on Detroit Avenue.

After the smoke clears, Lakewood would have on its hands a family health center, much like East Cleveland's Stephanie Tubbs Jones Health Center, and a nonprofit wellness foundation. The health center would include an emergency room and a range of outpatient services. Critics use the phrase "referral center," noting that Lakewood patients will likely be transferred to wholly owned Clinic hospitals like Fairview or Lutheran. The Clinic would give $24.4 million and 16 subsequent annual payments of $500,000 to the foundation for personnel costs and health-related services: $32 million all told. How that money is spent — like much in the foundation's inner workings — remains to be seen. (The cash transactions also permit the Clinic a future "naming opportunity.")