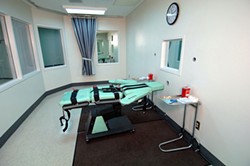 After allegedly trying and failing to obtain the necessary drugs by possibly illegal measures, according to a report from BuzzFeed earlier this year, and after a string of problematic executions in previous years that left victims gasping and writhing for damn near a half hour, Ohio announced that it's putting off all state-sanctioned state punishments until at least 2017 as it looks for the drugs.

The state already had been in a moratorium on executions, both court ordered and otherwise, and falls now in line with a string of states all struggling to secure the proper drugs through the proper routes before they resume killing people.

Twenty five inmates on Death Row that had dates with the needle before 2017 have now been given reprieve, their dates dotting, at least for now, from 2017 to 2019.

Ohio has run out of supplies of its previous drugs and has unsuccessfully sought new amounts, including so-far failed attempts to import chemicals from overseas.

The new dates are needed to give the prisons agency extra time, the Department of Rehabilitation and Correction said in a statement.

The agency "continues to seek all legal means to obtain the drugs necessary to carry out court ordered executions, but over the past few years it has become exceedingly difficult to secure those drugs because of severe supply and distribution restrictions," the statement said.

Last week, the attorney general's office in Oklahoma announced no executions will be scheduled until at least next year as the office investigates why the state used the wrong drug during a lethal injection in January and nearly did so again last month.

Earlier this month, an Arkansas judge halted the upcoming executions of eight death row inmates who are challenging a new law that allows the state to withhold any information that could publicly identify the manufacturers or sellers of its execution drugs.


Curious what some government officials, including the state Supreme Court, have to say about the death penalty as it should look in Ohio going forward? Here's our piece from last year on the 56 recommendations made by a task force appointed by justice Maureen O'Connor can be found here.

And for more on the shady man in India that has illegally sold sodium thiopental to U.S states, including Nebraska, read this tremendous, newly published BuzzFeed investigation here. (The state of Ohio has previously been in communication with the man, according to the report, but will not confirm whether it made a purchase.)