How and Why the Destitute Dead of Northeast Ohio Are Remembered

A quest across the River Styx

With each name, a bell tolls in memoriam. The low hum of suburban traffic provides a droning bass line as a group of 50 or so takes a Saturday morning in October to remember the dead.

The Rev. Raymond Guiao is presiding over a prayer service, a semiannual gathering of the Saint Joseph of Arimathea Pallbearer Ministry at Memorial Park, known historically as the local potter's field. Here, the city's poor and destitute and nearly forgotten souls rest in eternity. Guiao says, very simply, that the group is here "to give to those who have died and gone to the other side of life the dignity of being remembered." Students from St. Ignatius High School take turns reading off the names of everyone who has been buried since the last time the ministry congregated here. The bell tolls onward.

The potter's field in Cleveland is quite difficult to find, and that's not by happenstance. Located among a thicket of trees abutting Highland Park Golf Course, the cemetery bears no roadside signifiers. One must sort of guess which plaintive curb cut on Green Road will lead him or her to the cemetery. (It's the second one in on the west side of Green, just north of Harvard.) On the city of Cleveland's website, it's the only one of the city's cemeteries that doesn't have an address listed.

More than 18,000 men, women and children have been buried here since the cemetery's opening in 1904, according to estimates. (Scene's request to peruse the cemetery ledgers remains tied up in a Freedom of Information Act filing.) No one is permitted to be here when someone is being buried, which is quite often: The Saint Joseph of Arimathea Pallbearer Ministry buries more than 250 people each year in cemeteries around the city.

There are no headstones, no markers, no visible pattern to the cemetery's layout — just a single tree-lined driveway winding through the cemetery. When an Ignatius student takes a single carnation and walks across the park for a moment of silent prayer, there's no discernable place to pause and reflect. And so they take in the whole of the property: the unavoidably finite and humble resting place for those who tripped into death penniless and alone.

The central argument here — one repeated by small groups of the sacred and secular alike all over the world — is that we should embrace the memories of these people. They came before us, helping to construct the grand narrative of our society, strand by strand, in their own quiet ways. If we truly are all in this together, that deserves something.

"This is us recognizing these people who led full lives and showing them that we remember them," St. Ignatius graduate Connor Williams says.

Dying isn't free. The last act of a life is also the last act of consumerism. The average funeral costs between $6,000 and $10,000 these days. And even when the journey into the afterlife involves no family members or friends — and thus no funeral — there is still the pragmatic and cultural process of laying a person's remains to rest. 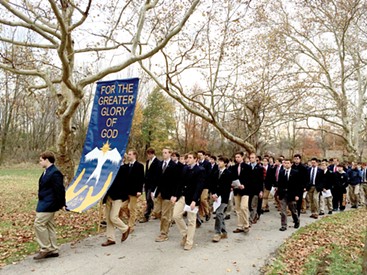 Members of the Saint Joseph of Arimathea Pallbearer Ministry attend a prayer service at Memorial Park.

Bottom line? For the poorest and most isolated among us, indigent burials clock in somewhere between $500 and $1,000. Those costs are borne by a person's city of residence, according to a 2001 Ohio law. Most cities have their own cemeteries, some of which are specifically designated for the poorest residents. Private cemeteries often donate plots to city governments as well, expressly for the purpose of indigent burials.

But if death itself is already a conversation our society tends to avoid, then the fates of the poorest and most isolated among us are stories that we often willfully obliterate.

If we look toward our deaths at all, we look hopefully forward to leaving an imprint — a hope that our departures will have left a mark and that we will be remembered. Confronting the idea that there are those among us who will not be afforded that celebration is discomforting.

In that way, pauper burials and potter's fields are processed in a cold bureaucratic sense. When someone dies and investigators determine that there are no funds, no bank accounts, no family members to take care of the arrangements, then the journey to join others like them begins.

Often enough, according to Cuyahoga County medical examiner Thomas Gilson, the process to identify someone as "indigent" begins at the scene of death. Perhaps this person died unattended; perhaps he or she was murdered. Investigators will then collect information on the person's family, neighbors or co-workers to begin making notifications and to determine whether there's a financial support system to shuttle this person into the afterlife.

"When [leads] get exhausted, we do just turn to the Internet to try to do searches, for family or next of kin," Gilson says. When nothing turns up at the end of all possible pathways, Gilson's office will get the person's hometown law department involved. That process alone might take weeks after an already drawn-out investigative process.

"It sort of buys us more time: Any of these leads that may become fruitful, it gives them some time to ripen," Gilson says.

But while there have always been sacred groups waiting on the other side to remember and consider the poorest souls, the legal framework for indigent burials hasn't always been there. Long before the advent of laws and processes like this, those who wanted to hide the destitute of society were able to do so with ease.

All it takes is a little time for nature to cover up a tragedy, to give the impression of healing a wound.

It may not be common knowledge even today, but the small cemetery on Deerview Lane in Lafayette Township at least has a sign now declaring it as a burial ground. And while the wooden marker is presently broken and lying on the ground, at least it's there. Lafayette Township trustee Lynda Bowers, along with a group of residents and historians and resident historians, helped make that sign happen, along with the flag, too, which whips around late-October gusts of wind when Scene comes looking for the place.

For decades, this cemetery was a guarded secret.

Located just down the road from the Medina County Home — referred to a century ago as "the insane building" — this isosceles sliver of land is one of thousands of small and mostly hidden potter's fields in the U.S. This is where the indigent and destitute of the Medina area were buried, where they were promptly concealed from society and time.

The grass is neatly grown in now and pine needles coat the ground. A railroad runs across the western edge, in all likelihood right over the top of various 19th-century graves. Light depressions dot the land and signify the orderly resting places of the dead. With a small driveway nearby, this land, now owned by the Medina County Parks District, is a gentle roadside dock for long-lost souls.

As recently as the mid-2000s, however, overgrowth and poison ivy ruled the property. A passing driver, even one actively on the hunt for hidden cemeteries, would be none the wiser.