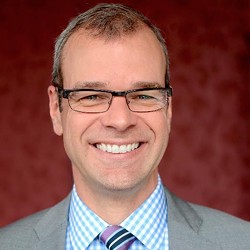 Campanelli, a Hudson resident, will be charged on December 30 for events that took place in November in Aurora. He told a reporter for Portage County's Record-Courier that he's currently being treated by two doctors for "issues that happened to me as a boy that manifested themselves in this kind of way." Also according to the Record-Courier:

Aurora Police allege John A. Campanelli, of Glen Echo Drive, exposed his genitals at least three times on Nov. 16 to a 23-year-old woman who was working as a lifeguard at the Aurora Inn.

Campanelli was cited, not arrested, according to police.

"We don’t plan to comment further about this publicly,” said Mary Kramer, VP and group publisher of Crain Communications Inc., in Cleveland and Detroit. "As with any personnel situation, we respect the privacy of the employee involved, regardless of his or her title."

Campanelli, 46, has been publisher of Crain's since 2013. Before that, he worked at the Plain Dealer as a reporter and editor for many years. He released this statement on Twitter Friday morning: