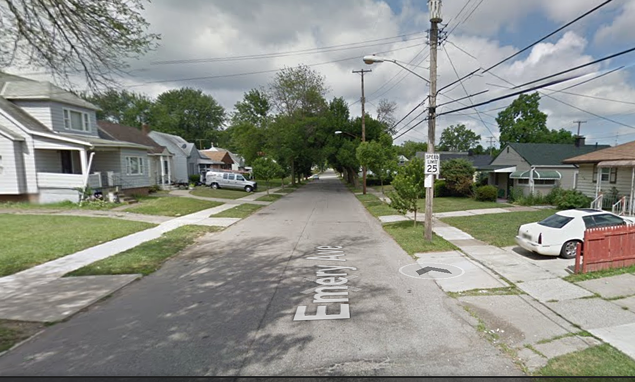 The block of Emery Avenue where the shooting took place.
Cleveland Police personnel are facing another federal lawsuit over accusations of excessive force. This time it stems from an odd bit of gunplay that unfolded on the city's west side in December 2013, a case of trigger-happy police and mistaken identity, according to the paperwork filed with the court this month — and, as with every other piece of police business unfolding in the 216 circa 2015, it's hard not to read over the account of the past incident without pulling up thoughts of Tamir Rice and the consent decree.

According to the filing, on December 10, 2013, Xavier Hempstead was minding his own business in his SUV on Emery Avenue, a ribbon of residential pavement west of Bellaire Road. He was a regular in the area: his grandfather built a house on the block, and his mother still lived there. Around 5 p.m. that evening, Hempstead was piloting his black SUV away from his mother's house when his phone pinged with a text. Hempstead pulled over to respond.

At the same time, plainclothes Cleveland police were in the area working a sting operation, eyes open for a black SUV. The officers were looking for a suspect in a car matching that description carrying a stolen assault rifle and shotgun. An undercover officer was planning to purchase the filched ordinance, then the rest of the team would pounce for the arrest. One unmarked car in the detail contained two undercover officers — Detectives Todd Staimpel and Robert Miles. When the police officers came across the SUV, they were ordered to make an arrest.

Inside his car, Xavier Hempstead was obliviously messing with his phone and listening to music. Then, looking up, he spotted two men approaching his car from the rear passenger side. "Det. Miles was standing within five feet of the SUV holding his service weapon," the lawsuit states. "Det. Miles then discharged his weapon twice through the rear passenger window of the SUV."

Hit, Hempstead still managed to drive off to a gas station, where he pulled over and laid on the ground. Police arrived quick and arrested Hempstead.

"He pulled in that driveway, he stopped maybe right about here, you know, he got out, got on the ground, laid down and you know, they swarmed him, of course with all their weapons," a store clerk who witnessed the arrest told Fox8 at the time.

"A bullet hit Mr. Hempstead in the left rear shoulder blade and exited through the top of his shoulder near his collar bone," the lawsuit states. "A bullet pierced the back of his neck and became lodged there. Mr. Hempstead’s scapula bone was fractured and metal shrapnel was deposited in the muscles along his spine. To this day, a bullet remains in his neck."

Initially, police releases following the shooting stated Hempstead was a suspect in the sting investigation. Det. Miles, the department initially reported, fired into the car after spotting the driver pointing a gun his way. The first coverage in the days following the shooting also focused on Hempstead's criminal record, which included previous charges of assault with a firearm, drug trafficking and robbery.

Still, no weapon was found in the SUV following the Emery Road shooting. Hempstead was charged with failing to comply with a police order and fleeing the scene — charges he was found not guilty of in a jury trial in July 2014. (Since the shooting, though, Hempstead has continued to have run-ins with police — court records indicate he's pleaded guilty to charges of trafficking, unlawful restraint, domestic violence, harassment by inmate, drug possession and having weapons while under disability).

But Miles' own record wasn't exactly clean either. As Hempstead's lawsuit highlights, in the year prior to the shooting, the officer was named in another federal lawsuit tied to excessive force. According to that complaint, the detective and other officers beat and tazed an innocent man at a traffic stop. The lawsuit was eventually settled, but the Cleveland PD should have been on notice the officer "had a practice of using excessive force, yet the City did nothing to prevent him from using excessive force in the future," Hempstead's lawyers argue in their complaint.

In this, the city exhibited a pattern of straitjacketing the violent activities of their officers. "Cleveland has a policy, practice and custom of allowing the use of deadly force on unarmed non-dangerous suspects," the complaint bluntly concludes. "These policies, practices, and customs directly and proximately resulted in the shooting of Xavier Hempstead, an unarmed man."

Miles was cleared in the shooting, according to the complaint. Cleveland PD spokesperson Detective Jennifer Ciaccia declined to comment on the specifics of the complaint, but she did confirm to Scene that Miles is still with the department on basic patrol.