Love in the Air As Cavaliers Trim the Nets 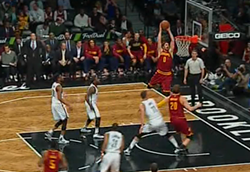 The Cavaliers came to the rescue of Cleveland’s beleaguered psyche last night with a 91-78 victory over the Brooklyn Nets. It brought closure to forty-eight hours of teeth-gnashing doubt, sports-talk hysteria and serious soul-searching whose conclusion for surprisingly many was a ticket out-of-town for shunned third wheel, Kevin Love.

The airwaves were so thick with haters and bandwagon-bashers, it was like Big Lebowski Night at the Hotel California. After posting just three points (his Cavalier low) against the Warriors and being abused so badly on the defensive end that Amnesty International’s investigating, Kevin Love gave the fans (some of them anyway) what they wanted – a big bounce-back game.

Love scored 17 points and grabbed 18 of the team’s 39 defensive rebounds in just over 31 minutes of play. It was vintage Love demonstrating Swiss Army Knife versatility, including fallaways, step-back jumpers, three-pointers and a fabulous alley-oop from LeBron James courtesy an out-of-bounds play out of a timeout.

Note how the play uses LeBron James as the feeder and finds Kyrie Irving setting the pick. This is emblematic of the team’s approach, as the two stars made sure that Kevin saw the ball. Racing beside J.R. Smith on a fastbreak, LeBron didn’t jam it but instead found Love in the corner for three.

For his part, Love moved and played decisively, shedding for one night the hesitancy that’s nagged him intermittently since arriving, sort of a summer cold of inactivity. One doesn’t have to be hating to recognize that Love can tend to become passive, particularly when he doesn’t see the ball because Irving and James are dominating it.

Last night, he took advantage of his opportunities, making not just half of his ten shots, but getting to the line for eight free throw attempts. That ended a three-game free throw drought for Love, the longest of his career. (Love has never even had consecutive free throw-less games before coming to the Cavs and having two such stretches in February and March of last year.) Worth noting during the drought 15 of his 28 shots were 3s.
Above you’ll find each of Love’s hoops, each utilizing a slightly different aspect of his offensive toolbox. Many of these scores and his attempts that resulted in free throws were off movement, rather than post-up, as James and Irving hit him quickly off cuts rather than dither on post entries.

After the game, well-spoken vet Richard Jefferson offered keener analysis of Love’s conundrum than anything heard from Love-bashing talking heads this week.

“Kevin is in a very difficult position because he’s not a ballhandler and our two best players outside him are ballhandlers so they kind of control the tempo,” he explained. “So Kevin has to do a lot better job of being aggressive… he’s not going to just get 20 touches on the block regardless. If he’s going to get an opportunity, he has to take the opportunity and be aggressive. The minute he starts becoming more passive it’s going to be more difficult for him to get himself the ball.”

There have been hints since Kyrie came back that James was going to take a lesser role in the offense than last season. We've witnessed in past weeks more plays featuring James playing off the ball and receiving passes off cuts. While it will obviously vary game to game, but James has been taking a lot less shots all month long. Last night, James finished 7-12 with 17 points in around 29 minutes of play.

He had six points in a decisive burst during the last half of the first quarter. Few will remember given that the Cavs maintained at least a 10-15 lead the entire second half, but Brooklyn held a 15-13 lead with half the first quarter gone.

Fans know this isn’t unusual. For whatever reason, the Wine and Gold don’t seem to get focused in until half the first period’s done. In this case it was LeBron imposing his will at the rim. He scored six consecutive points with the game tied at 15, and Cleveland never looked back.
In January, through ten games, James has one of the lowest monthly usage rates of his career (28.2) only match by December 2013 (28.2) and last April (28.1). James is taking just 16.1 shots/game this month, compared to 20.6 in December.

He’s definitely pulling back, presumably to afford Irving and Love more time on the offensive buffet line. The lower usage has also allowed him to drop his turnover/game to 2.8 in January vs. 3.4 for the year and 4.2 in December.

Mozgov Heats Up As Temperature Drops

Maybe he feels more at home in sub-arctic temperatures, maybe the time on the bench gave him a chance to rebuild his confidence, maybe LeBron promised to stop glaring him down for every dropped pass, maybe his knee feels better. His skills disappear and reappear with so little logic or warning, perhaps Mulder and Scully should open an X-File.

Last night it was Good Timo, as the gentle giant revisited last year’s rim-busting ways with a couple nice slams off penetration feeds, and even dropped a jumper from the top of the key. He escaped without a turnover, though he did struggle to handle a pass that literally hit him in the hands. (Yes, Brook Lopez tipped it. Slightly.)

With Mozgov starting the last three games, it’s reasonable to wonder if Thompson’s perpetual (or returning) issues protecting the rim encouraged Blatt to make the change, or whether he saw enough improvement in Timo to feel comfortable putting him back in the starting lineup.

One of the more enjoyable aspects of the victory over the Nets was the team’s more judicious use of their long-range calling card. All season, we’ve been complaining about the team’s tendency to fall in love with the three.

While open threes – particularly late in the clock – are fine, they’re not always so hard to get, and sometimes the team would be better served passing it once or twice more and getting an even better shot at the rim. This is one of the ways the team’s ball movement can suffer from excess threes.

Also the team shoots less free throws when taking lots of three-pointers, which is bad news for the Cavaliers whose free throw rate is 17th in the league (one better than Golden State). While they’ve won their last six games in which they’ve taken 30 or more threes, they lost the previous four before that.

Against the Warriors they shot only 19 threes, the first time all season that the Cavaliers have taken less than 20. Last night against the Nets they took only 17. Nobody asked about it, so we have no idea whether this is a conscious effort to get to the rim and eschew the long shot.

Sometimes that’s the better idea. J.R. Smith is a great dsitance shooter who's shot 37% for his career and is shooting 38% this year. But teams are chasing him off the three, closing hard on his opportunities.

Smith’s taken what the defenses are giving him, driving the ball to the rim like he did in the early years of his career. Fred McLeod dropped the cool stat that Smith is shooting over 60% on dribble drives – that would make those even more efficient than his three-point shooting.

The team is clearly beginning to appreciate a new truth about the NBA: Teams are rushing the three-line so hard, that if you aren’t taking advantage by driving or cashing midrange jumpers, you’re probably hurting yourself.

One of the curious things you’ll hear Cavaliers players and Coach David Blatt talk about is “pace.”

“Coach has been pressuring us about pushing the tempo pushing out pace and getting up the floor and I think we did that tonight,” said James after the game.

But the Cavaliers are not a true running team. They’re 12th in the league in fastbreak points, which is actually pretty impressive when you discover they play at the third slowest pace (as judged by number of possessions/game) in the NBA with just over 95 possessions/game as compared to second-place Golden State’s 101.7. (Sacramento is #1 with 101.9.)

What the Cavs are looking to do is get the ball into the frontcourt quicker so they can get into the offense, maybe get a transition offense basket or at least attack the opponent before they can get their defense set and all their players matched up on their proper man.

"Last few games we’ve kind of let teams dictate the tempo and myself and 'Bron, we did a great job of forcing it even if we didn’t have numbers, but getting everybody up the floor either a little bit under 20 or a little over 20," Irving said. "We have to continue with that pace."

The Golden State Warriors, as you might imagine, are great at this and get almost a third of their shots in the first nine seconds of the shot clock. The Cavaliers get less than a fourth of their shots that early.

As you can see, the Cavs are pretty good whenever in the clock they shoot the ball, with the exception of late in the clock with 4-7 seconds left, where Cleveland’s in the middle of the pack. But if you check the percentages you’ll also notice that the earlier in the clock you shoot, the better your chance of making the shot regardless.

This is what underlies the Cavs desire to push the pace and get shots a bit earlier in the shot clock.

We were also curious about their ball-pounding ways, where , indeed, they were one of the leaders (with tonight’s opponent, the Los Angeles Clippers) in frequency of shots featuring 7 or more dribbles. Strangely, the Cavaliers shoot better the more the smother the ball. Perhaps this underlies part of their issues with ball movement – they’re surprisingly successful even without it.

The Cavaliers bought the ball and body movement that was lacking against Golden State, and made it a point to get everyone involved. It was great to see even if the team did ultimately only end up with 15 assists on 36 buckets. We expect that to improve.

"As this team gets tighter and starts maturing and as a whole I think there was a little bit less joking around in practice, there is a little more seriousness in shootaround," Jefferson said. "Guys are going out there and getting a really good warmup because we’ve had a couple slower starts to games. So I think the overall seriousness of our group is increasing."

However any good feelings generated by beating the Nets must be tempered with the knowledge that they’re probably the worst team in the Eastern Conference right now, given Philadelphia’s recent surge.

Given how poorly the Cavaliers performed against the Warriors, not having a bounce-back game would’ve caused more anxiety than this win salved.

Pragmatically, the best news to come out of the game was that the second team held strong enough for the starters to sit the entire fourth quarter. That will come in handy tonight against a Clippers team that’s won 11 of last 12, all but one without their superstar Blake Griffin, who is supposedly aiming to return against the Cavs.

The back-to-back will put added pressure on the Wine and Gold, making this game a better measuring stick than the Nets of just how mentally tough and focused the Cavaliers are as they hit the midway point in the schedule. (The Clippers are game #41.)

We’re expecting the Cavaliers to ride the momentum of last night and the embarrassment of Monday to a victory, but this team has a serious bi-polar tendency, so we can’t dismiss a letdown or Los Angeles simply outplaying them.

We’ll be at the Q for the game, where we’ll be posting video, snark and analysis. You can follow on Twitter @CRS_1ne, and read our postgame take in the Scene Blog on Friday morning.