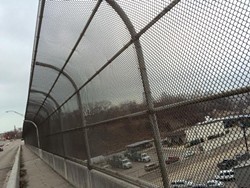 ERIC SANDY
The fencing on West 25th Street over Train Avenue exemplifies the sort that ODOT will be rigging across more bridges in the state.
After Lake Township resident Sharon Budd was hit in the face by a rock thrown over a Pennsylvania overpass in 2014, policymakers in Ohio are expanding the guidelines for protective fencing in this state.

Beginning Jan. 1 this year, all new bridges undergoing construction work across highway interstates and state routes must have protective fencing. (See the photo for an example of what the ODOT fencing looks like.)

"We've been putting up fencing for a while. This just expands the way we do it," ODOT spokesman Matt Bruning tells Scene. In the next five years, an additional 167 bridges in Ohio will be set up with this fencing.

The Budd family is hoping to continue its advocacy work in other states and urge lawmakers to adopt this type of protective measure.