The Population Boom in Downtown Cleveland is Very Real and Very Good. But How Long Can It Continue? 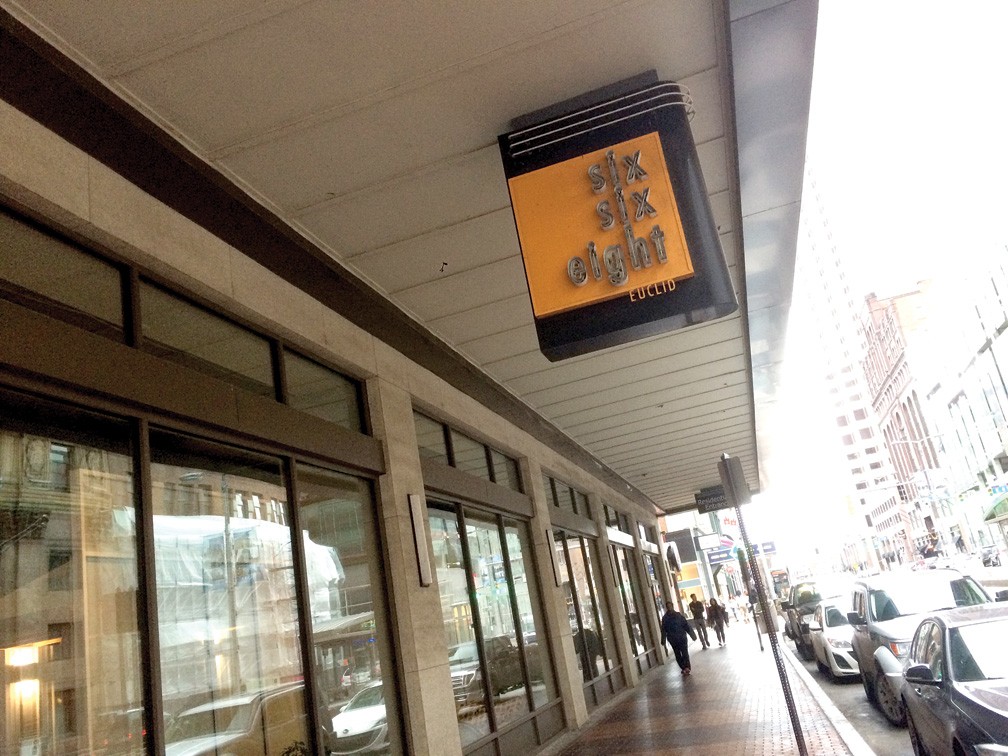 The place is on the sixth floor. Two bedrooms, two and a half baths, 1,800 square feet all told, with exclusive rooftop patio access. In fact, the place is the entire sixth floor. It's been on the market for under a month by the time we show up to have a look. By the time you read this, it's long gone.

"We had to move the kitchen over a little bit and run the stairwell up to the deck," Rich Cicerchi says. He owns the East Fourth Lofts, where we are now, and he's got this one open unit available. It's primo real estate, overlooking the main nerve of Cleveland's dining scene. Below, diners flock to Greenhouse Tavern and The Butcher and the Brewer in after-work droves.

Cicerchi is joined today by Amit Patel, CEO of local "apartment search concierge" service Quo. Patel hooks up interested renters with people like Cicerchi — people who hold the keys to the New Cleveland Life and who are eagerly listing modernized apartments all over downtown. Patel says business is going exceptionally well. The steady barrage of Downtown Cleveland Alliance statistics and residential development headlines would concur.

See, downtown's residential population boom — a 97.6-percent occupancy rate with apartment-complex waiting lists that extend for "years" in some cases — is a social and economic behemoth unlike anything the city has seen in a long time. It's a new Cleveland identity entirely. It's upscale.

Moving the kitchen wall in this sixth-floor unit was a good move, it would seem, since the rooftop alone is a thing of beauty. Up top, we scan the Gateway skyline and take in a different view of this bustling city. The brickwork whispers: This could be your world.

"I wanted to show you something unique," Cicerchi says. "I could show you high rises, but you'll never get access to something like this." He's absolutely right, and so that's one important thing to bear in mind: There's still something very novel about the experience of living in downtown Cleveland. It's a thrill.

Who'd have thought that 10 years ago?

Briefly, the history of downtown Cleveland as a residential neighborhood goes like this: There were very few people living here, and then there were lots of people living here. A downtown address calling card — "I've got a place at The 9" — quickly became a point of status. Millennials, mostly, filtered through urban studies theorist Richard Florida's well-researched "creative class," arrived.

The apartment building we're checking out today anchors East Fourth Street, which for many years was little more than a half-shuttered retail alley. This building was once a light manufacturing warehouse of sorts — a holding center for theatrical equipment, mostly — meaning there was a lot of empty space arcing across thick concrete floors. Good for redevelopment into high-end lofts. This one's a beauty.

Cicerchi bought the place in 2006. The plan was to make it into condos, but when the market tanked a few years later he decided to "finish it and rent." He started with Wonder Bar on the ground level, and then worked his way up, floor by floor. This unit at the top was completed about two years ago.

"[People] want proximity to downtown, but they really want modern amenities: central air, brand new furnaces — brand new everything," Cicerchi says, rattling off the work he put into this place.

So that's what happened here. It's still happening, too, all over the city: Old buildings becoming new again.

Rents will go up as downtown continues to grow. Personally, Cicerchi sees another 10,000 people moving downtown in the coming years. There's no reason to doubt that. "Downtown" is closing in on some 15,000 residents, up 70 percent since 2000. (And in 1990, the downtown population was 4,651.) As of last fall, the Downtown Cleveland Alliance stated that, "275 apartments are currently under construction and another 4,000 are in various stages of planning."

Coming online in the next few years: major residential developments on Public Square and Johnson Court, at the May Company and Halle buildings, at the imminent nuCLEus project across the street from Quicken Loans Arena, and elsewhere, scattered like beacons in a city that's beginning to stir itself out of bed. When they open, the inevitably upscale units will greet the thousands of tenants waiting to sign leases downtown. There's no end in sight. Demand is soaring.

The Cleveland rental renaissance is here.

All those folks are packed into approximately 6,665 housing units across downtown's 3.2 square miles. Of those, only 880 are owner-occupied. That leaves 5,785 rented units downtown: 87 percent of all housing units.

There's reason to discuss the longevity and the sustainability of the downtown housing market — if not express outright concern for it. The same conversations are quietly taking place every time a new hotel project is announced downtown, for instance. "How can we fill those rooms each night?" Concern like that is not a good look for a city hellbent on a positive image, a city careening into the Republican National Convention and beyond, but it's healthy and necessary.

In this case, though, the growing worry has more to do with a residential market being built on the backs of leases and tax abatements.

Meanwhile, in that same period, the rental market jumped from 4,636 total units to 5,785. In tandem, square-foot pricing bumped up from $1.14 to $1.33. The average monthly rent is $1,107, according to the DCA. Occupancy now hovers above 97 percent. Waiting lists in some buildings range from "40 to 100" prospective tenants per unit type (one-bedroom, two-bedroom, etc.), according to one broker.

The DCA says 1,700 people are waiting to move downtown at any given time.

In all, 18 new residential buildings have been built since the 2007 boom. Another six are currently in the midst of renovations. At least 10 more are "planned."

The DCA insists that 535,042 residents in "greater Cleveland" could afford downtown living. That's 30 percent of our five-county region. Meanwhile, median household income in Lorain, Medina, Lake, Geauga and Cuyahoga counties dances around $57,000. Based on conversations with a number of people plugged into the market, one would need to pull in $70,000 to, preferably, $80,000 yearly to live comfortably downtown. (For $35,000 or so, you can get by in the neighborhoods.)

So who's moving in?

Cicerchi and Patel agree that the two main demographics flowing into downtown find themselves at two distinct stations in life: before kids and after kids. Mainly, downtown is seeing young professionals under 35 taking up residence at any of the fine and enticing apartment complexes in the heart of the city. Also, there are plenty of empty nesters — 55 and older —either moving in wholesale or picking up a property to enjoy on the weekends or rent to whomever.

Those buyers, however, are outliers in the growth story of downtown Cleveland. And that may be an issue worth confronting in the years ahead.

Jesse Howells, CFO at Howells & Howells Enterprises, has been living downtown since what he terms the "Wild West" days of downtown life. In 2007, he says, his father purchased the Park Building and Southworth Building on Cleveland's Public Square. That move helped return Howells to the North Shore to begin working with the family's development company. Cleveland had yet to fully transform.

He's familiar with the growth Cleveland has experienced since then, and he celebrates it. As downtown settles into a new identity — and quickly, amorphously — he's among many who are unsure of how solid that footing really is.