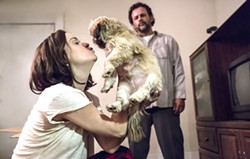 Lifetime
Taryn Manning as Michelle Knight and Raymond Cruz as Ariel Castro.
The Lifetime movie Cleveland Abduction, which tells the story of the Ariel Castro kidnappings, is now available at Cleveland Redboxes.

The film premiered on the Lifetime channel in April, 2015 and continues to air periodically. (This Saturday at noon, for instance).  It's based on Michelle Knight's memoir Finding Me: A Decade of Darkness, a Life Reclaimed, and stars Taryn Manning as Knight and Raymond Cruz, (who starred as Tuco Salamanca in AMC's Breaking Bad), as Castro.

As should be expected, it's pretty tough to watch.

For those who weren't following the case as it unfolded after the miraculous escape in 2013, Cleveland Abduction chronicles the 10-plus years that Michelle Knight, Amanda Berry and Gina DeJesus spent in captivity in a home on Seymour Avenue. It does so in fairly explicit detail.

Knight is the film's central figure. In the aftermath of the real tragedy, Knight changed her name to Lillian Rose Lee, embraced tattoos as a means by which to tell her story, and has remained isolated, (at least in the public eye), from Amanda and Gina, who coordinated their media appearances and published material in tandem.

In the film, Knight is something of a mother figure. She is abducted by Castro first, tricked into entering Castro's home to see a litter of puppies, and suffers routine rapings and physical abuse for nine months before Amanda Berry is captured. She is brutalized by Castro and, in one harrowing scene, is forced to deliver Amanda Berry's baby at gunpoint.

"If the baby dies, you die," Castro says.

The tragedy of Knight's loneliness, and her ability to overcome it, is the movie's predominant emotional arc. Castro continually reminds Michelle that unlike Amanda and Gina, no one in Cleveland has held candlelight vigils for her. No one loves her. Even among the trio of captives, she is the unwanted one. Taryn Manning conveys a tragic ambivalence when Castro announces that Amanda will be having his child, even after he starved and beat Michelle with a dumbbell when she had become pregnant. (Knight has said that she became pregnant five times during the course of her captivity). 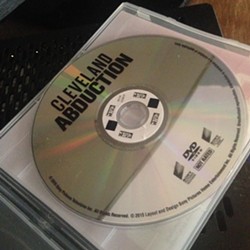 Sam Allard / Scene
In the movie, Michelle is fortified by the memories of her young son and an abiding faith in God. It's a faith which manifests in one or two awkward Lifetime-y scenes, but is otherwise understood as a necessary balm and rock.

At 87 minutes, the narrative limitations are evident, and largely inherent in the nature of Castro's crimes. Captivity is tragic but tedious business. And other than the scant opportunities that Michelle has to get the attention of visitors, neighbors or police officers outside, the ordeal is an eternity of boredom, filth and fear.

To the extent that it faithfully honors Knight's memories and interpretation of events, Cleveland Abduction serves as a vivid visual aid. Many of us had imagined the scenarios and the physical arrangements as the news reports trickled out in 2013, but seeing this re-enactment brings the horror to life.

Foremost among those horrors: that it occurred in plain sight.

Cleveland Abduction was filmed in Cleveland — the city's landmarks and gloomy skies will be immediately recognizable — and despite the limited crew size, the camera work and lighting are both Hollywood-grade.

We rented ours from Kiosk A at the Dave's in Ohio City. (The Walgreen's on Clark didn't have a copy). You can see all local pick-up locations here.