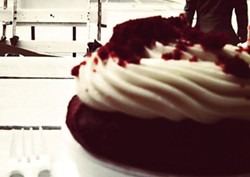 Courtesy of Colossal Cupcakes
Update: Well, it was later in the year than they had originally planned or hoped for, but Colossal Cupcakes' location in Crocker Park has a firm opening date now. That would be this Friday, at noon. (Original plans called for April, but things happen and it's August now but so what, you get cupcakes.)

CC is among a small group of businesses opening micro-retail spots in the westside suburb including D's Accessories, CLE Clothing Co. and Kernels by Chrissie.

(Original story 2/23/16): Colossal Cupcakes is on the move, announcing the opening of their Crocker Park location this spring.

The cupcake eatery is currently located downtown at 538 Euclid Avenue; Crocker Park will be their second location. They opened their downtown location in 2012 and occupy the space that used to belong to Octane. (Remember that place?)

In case you're wondering, the "colossal" in Colossal Cupcakes comes from their signature size—almost that of a full-size muffin. They also have at least 30 different flavors available daily.