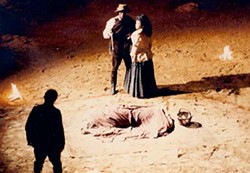 George Bizet’s Carmen regularly appears in lists of the top ten operas performed across the globe, but like Handel’s Messiah, there’s no definitive version of the piece. The score of Carmen has been touched by many hands since its Paris premiere in 1875, as it has evolved from a comic opera with spoken dialogue to a grand opera with sung recitatives.

The most radical version of the work, Peter Brook’s La Tragédie de Carmen, which premiered at the Vivian Beaumont Theater in New York in 1981, reduces Bizet’s four acts lasting about 2-½ hours to one act lasting 85 minutes. Brook also stripped out the chorus, reduced the orchestra to 14 players, and cut many of the original elements from the score.

BW Opera Theater will present Brook’s The Tragedy of Carmen in the Robert Allman Theater on BW’s Berea campus from February 25 to 28, with evening performances running from Thursday through Sunday at 7:30 pm, and matinees on Saturday and Sunday at 2:00 pm. The production will be directed by Victoria Bussert, BW’s director of musical theater. We reached her by phone to get her take on the Peter Brooks version of the show.

“I wouldn’t call it a condensing of Carmen. I’d call it a re-imagining,” she said. “I was fortunate enough that when I was a teenager, my mother took me to see this version at Lincoln Center when Peter Brook brought it over to New York. I can describe in detail very specific moments of that experience that impacted me as a director for the rest of my life. I don’t think I ever took a breath during that production. I just found it extraordinary.”

Beyond Carmen, Bussert has been impressed by Peter Brook’s approach to theater in general. “He is definitely one of my idols. I’m one of those crazy people who sat through all nine hours of his Mahabharata [his 1985 staging of the Indian epic poem] twice in New York. His focus, dedication, and passion for bringing very raw, very true, and yet very theatrical pieces to life are very inspiring to me.

“The Tragedy of Carmen was the first time his theater company in Paris had worked with opera singers. There’s a wonderful video showing different exercises they did in the rehearsal process. I have always loved the times I have directed opera, because I find that singers embrace being treated as actors. Extraordinary things happen vocally because their focus has shifted.” Read the article at ClevelandClassical.com