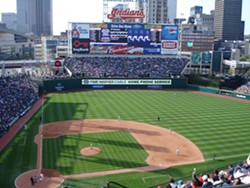 Wikipedia
If you were hoping to snag a ticket to the Cleveland Indians' home opener, we hope you've bought them already.

This morning, just 40 minutes after tickets went on sale, the team announced the game against the Boston Red Sox on Monday, April 4, is already sold out.

Great seats remain for other 80. Get 'em here: https://t.co/JQQUFEWV1D pic.twitter.com/TnwOJFD90F

They play the Red Sox on April 6 and 7 as well, in case that matters. Tickets to those games are still available, as are PLENTY of tickets to the 78 other games that follow the opening series.

Reminder: Progressive Field has a slew of new local food options debuting for the 2016.