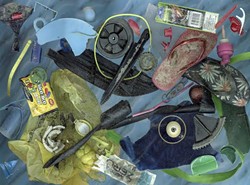 Barron
Edgewater Beach No. 1
From 5 to 8 p.m. this Friday, March 4, the Bonfoey Gallery hosts two simultaneous events: the opening reception of Ron Barron’s new exhibition, Gleanings, and CAN Journal’s Spring 2016 Issue Launch Party. Additionally, the Launch Party will introduce the Cleveland Foundation’s latest batch of Creative Fusion Artists from around the world.

“With the Spring issue, we begin a partnership with the Cleveland Foundation, enabling coverage of the Creative Fusion program,” explains editor and publisher of CAN Journal Michael Gill. “Since 2008, Creative Fusion has brought artists from around the globe for three-month residencies in Cleveland. Over the years the Cleveland art scene has met artists from Chile, Taiwan, Korea, Albania, New Zealand, Australia, Iran, South Africa, and other countries. Each is paired with a host organization, which gives them a platform from which to make work and engage the community. Through the years a range of members of CAN have participated in Creative Fusion, including the Sculpture Center, Center for Arts Inspired Learning, Cleveland Print Room, Zygote Press and others."

The cover of CAN Journal’s new issue features a recent collage by Clotilde Jimenez, who is quickly becoming one of the fastest rising young artists in the local art community since graduating from the Cleveland Institute of Art in 2013. (Each quarter, the Collective Arts Network (CAN) distributes 10,000 copies of its CAN Journal to more than 200 locations throughout Cuyahoga County.)

“The Spring issue of CAN includes previews from 36 organizations, as well as important features,” ellaboartes Gill. “Douglas Max Utter reviews Unfixed at Transformer Station. I discuss making art about race with Clotilde Jimenez and Darius Steward. Henry Adams discusses the history and future of Cleveland Institute of Art in light of the school's unified campus. And of course we offer comprehensive listings of exhibits through the spring of 2016.”

Barron’s most recent body of work, Adrift, is a series of six large paintings and nearly 300 digitally scanned compositions of collaged materials comprised of debris found washed ashore from Lake Erie and the North Folk of Long Island and Venice Beach. The exhibition also includes a documentary of the artist’s process by Richard Hahn and Megan Barron. Gleanings is curated by Bonfoey’s Gallery Director Marcia Hall and Assistant Director Diane Schaffstein.

“My childhood summer vacations were spent in Lake Erie, mostly underwater. At night, when I finally gave in to exhaustion, I fell asleep, lulled by the rhythms of endless waves. As an adult I have swum in the Atlantic and Pacific oceans, the Ionian Sea and the Gulf of Mexico, always comfortable in the element of my origin. Today, I float in the strong tidal currents of Peconic Bay on Long Island, still mesmerized by the fact that everything in the universe is adrift – galaxies, planets, continents, and even detritus that washes up on beaches. “

He continues: “For years, drifting shapes have formed in my imagination: patterns of the visible and the invisible, the factual and the speculative. They relate to the vast, incomprehensible galaxy-filled universe and the subatomic realm of theoretical physics. Co-existing in my mind are both scientific facts and these mysterious visual images that underlie the entire ADRIFT project. These works number more than three hundred digital scanned collages: images of stopped time, glimpses into the metamorphoses of matter drifting in an eternal stream. Eternity is time stopped.”

Friday’s reception for both events is free and open to the public. Gleanings will remain on view in the street level and lower galleries at the Bonfoey Gallery through April 2. Regular gallery hours are Monday through Thursday from 8:30 a.m. to 5:30 p.m., Friday from 8:30 a.m. to 5 p.m. Saturday from 9 a.m. to 3 p.m. and by appointment.