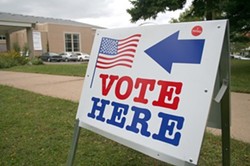 2.) Make sure you're able to identify yourself. They'll still let you vote if you can't (see #5), but being prepared is much more awesome and less time consuming.

3.) Do you know if you're registered to vote, or even where you're supposed to vote? The state of Ohio tells you in a rather roundabout way on the Board of Elections website.

4.) YES, SOME 17-YEAR-OLDS CAN VOTE! *Ahem* Per a very recent court ruling, if you're currently 17 and will turn 18 before the election, you have the right to vote in the March 15 primary.

5.) If you're name doesn't appear on the official poll list for some reason, or you have no forms of ID on you, you may still be able to vote via a provisional ballot. Don't worry, it happens. Here are some scenarios where this might occur and how to deal with it.

With all that said, happy voting.