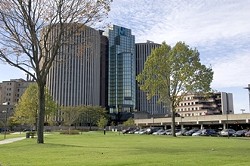 Wikimedia Commons
Claiming now that his allegations against MetroHealth executives a few months ago were “untrue and inaccurate,” former internal audit director Simpson Huggins III has withdrawn his lawsuit against the hospital.

Recall that Huggins reported in December 2015 that two MetroHealth vice presidents and at least one employee’s relative had accepted free Botox injections and other services from MetroHealth’s Pepper Pike Dermatology Clinic. He also presented a discovery of "thousands of dollars in improper expenditures and reimbursements for personal expenses accepted by Chief Executive Officer Akram Boutros including what appeared to be personal trips to London, Venice, and Abu Dhabi.”

MetroHealth leaders "categorically denie[d] all allegations in the complaint and discovery notice" at the time.

The lawsuit went on to detail “retaliation” against Huggins once he revealed his findings. He claimed that he was excluded from the Finance Committee meeting that followed the Audit Committee hearing where he announced these allegations. He said he was then confronted in the hallway by general counsel Michael Phillips, Vice President of Human Resources Debbie Warman, and a MetroHealth detective. According to Huggins at that time, Phillips accused him of "overstepping his bounds" and looking at records he “shouldn’t be looking at.”

Before being escorted off the property, Huggins said, his flash drive, hospital ID and filing cabinet keys were confiscated.

Huggins was fired in January.

"I sincerely apologize to the MetroHealth System and Dr. Akram Boutros, CEO of MetroHealth, for bringing the lawsuit against the hospital. The allegations of wrongdoing by MetroHealth and its executives are untrue and inaccurate. I deeply regret any damage the lawsuit and unjustified publicity caused the hospital, and any pain and suffering caused to Dr. Boutros and family, friends and colleagues, " Huggins wrote in a letter of apology released this week.

No further explanation was provided.