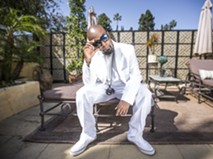 Juggernaut Sound
Rapper Tech N9ne (Aaron Dontez Yates) has found memories of performing in Cleveland. He’s played in town numerous times over the years, often at the now defunct Peabody’s, a venue that hosted metal and hardcore as much as hip-hop.

“We would be doing our rap show and in the other room there would be an Aryan Brotherhood thing happening with skinheads and shit,” says Yates via phone from a Myrtle Beach tour stop. He brings his Independent Powerhouse Tour which features acts on his Strange Music label to the Odeon at 6 p.m. on Saturday. “Nothing bad happened. It was so wonderful. During the wintertime, it would be so hot that we would have to open the door back by the stage so we didn’t die.”

He even wrote the song “Riot Maker” about an incident involving a girl who became injured while crowdsurfing.

“This girl was surfing and kept surfing and someone dropped her on her head and she cracked her skull,” he says. “They had me sign this poster and take it to the hospital. She got it and months later, her parents convinced her to sue Strange Music and everybody involved for $100,000. I talk about it in ‘Riot Maker.’ It’s the second verse. It’s one of my biggest songs now. It happened in Cleveland. That’s just one of the stories that influenced ‘Riot Maker.’”

For the Independent Powerhouse Tour 2016, acts such as Ces Cru, Stevie Stone, ¡Mayday!, Rittz, Krizz Kaliko will accompany Yates. The Kansas City rapper has finally started to get his due and has appeared on Jimmy Kimmel Live, Revolt TV, Skee TV, MTV Jams, and BET's 106 & Park in the past two years. Last year, he had the biggest radio hit of his career with "Hood Go Crazy," a song that features 2 Chainz and B.O.B.

Yates pushed the boundaries of conventional hip-hop too. A choir performs on the song “Lacrimosa,” making it sound like something by the classic rock group Queen.

“We found them here in Kansas City,” he says when asked about the choir. “My producer said he had this choir and they could recreate something for me. My mom had just died from lupus. It was time to talk about it. Lacrimos is Latin for weeping. It was perfect for me. On this tour, the song we play before we come out on stage is ‘Lacrimosa.’ It gets us pumped up.”

At a time when critics say hip-hop is dead, Tech N9ne continues to be prolific. He has another studio release slated to come out this year.

"It’s just people hating on the youngsters like Rich Homie Quan and Young Thug and 2chainz and Lil’ Wayne and Drake," he says when asked about the criticism of hip-hop. "They hating on the youngsters. The youngsters are going to do what they do. When you have people like Eminem and Kendrick Lamar and J. Cole and all these wonderful MCs, it’s out here for all of us. You can choose any style you like. Just because the masses gravitate toward the simplistic stuff, doesn’t mean you have to hate on them. They keep this shit going and we’re going to keep this going as well with innovative lyrics. There are Rich Homie Quan songs we love and dance to. There are Young Thug songs that I love and dance to and sing along to. I can’t do that like they do, and they can’t do like I do."