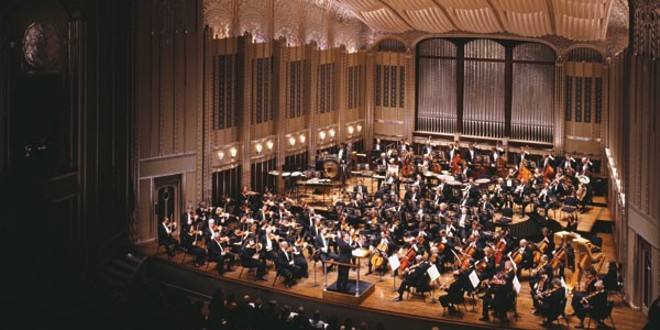 Courtesy Cleveland Orchestra
Beethoven keyboard guru Rudolf Buchbinder will join music director Franz Welser-Möst and The Cleveland Orchestra for four concerts at Severance Hall this weekend: Thursday, May 19 at 7:30 pm, Friday, May 20 at 11:00 am, Saturday, May 21 at 8:00 pm, and Sunday, May 22 at 3:00 pm. The programs will feature Buchbinder in Ludwig van Beethoven’s “Emperor” concerto (the fifth and last of the composer’s piano concertos), and the Orchestra will add Czech music to the mix: Antonín Dvořák’s The Wood Dove (except on Friday), and Leoš Janáček’s Suite “From The House of the Dead.”

The Dvořák tone poem tells the cheerful tale of a woman who poisons her spouse and remarries. The dove unremittingly sings a sad song on his grave, driving the wife to drown herself in a river. The Janáček, a set of pieces excerpted from his opera based on the Dostoyevsky novel, is set in a prison in Siberia — the percussion section includes clanking chains! And the Beethoven concerto will send you home in a cheerful mood. Tickets can be reserved online.

Quire Cleveland is devoting its final concert of the season to sacred music by William Byrd, perhaps the greatest composer of the English Renaissance, who skillfully navigated the troubled religious currents of the time, remaining staunchly Roman Catholic during the several waves of the Protestant Reformation. Others lost their heads while Byrd survived — and thrived. The engaging musical scholar Kerry McCarthy, lately of Duke University, will give a lecture based on her recent book about the composer on Thursday, May 19 at 7:30 pm at the Hermit Club in Playhouse Square (tickets here). She’ll also talk about Byrd in lectures preceding Quire’s two concerts on Saturday, May 20 at 7:30 pm at St. Bernard’s Church in Akron, and on Sunday, May 21 at 4:00 pm at St. Peter’s Church in downtown Cleveland. Ross Duffin conducts the professional choir. More details and ticket information on Quire Cleveland’s website.

Cleveland Institute of Music graduate Ryan Anthony, one of the trumpet stars of his generation, played with Canadian Brass before landing the job of principal trumpet with the Dallas Symphony. Then cancer struck in 2013 in the form of multiple myeloma, now happily sent into remission through stem cell therapy. Since then, Anthony and his wife have established the Ryan Anthony Foundation to support research into the terminal disease. The second “Cancer Blows” benefit (the first was held in Dallas) will take place in Severance Hall on Friday, May 20 at 7:30 pm, when fellow trumpeters Vince DiMartino, Joe Burgastaller, and Michael Sachs will join Anthony to play with groups from the Cleveland Youth Wind Symphony. Tickets are available through the Severance Hall box office.

One of the city’s oldest musical ensembles, the all-male Singers’ Club of Cleveland, will “Celebrate Jazz” at St. Ignatius High School’s Breen Center in Ohio City on Saturday, May 21 at 7:30 pm. The Marshall Griffith Trio and vocalist Barbara Knight will join the men’s chorus in jazz classics ranging from Gershwin’s Fascinating Rhythm to Paul Desmond’s Take Five, with a Pink Panther and a Girl from Ipanema in the mix. Tickets can be reserved on the Singers’ Club website.

Speaking of jazz, one of the instruments most closely associated with that musical genre is the saxophone, though the Belgian inventor Adolphe Sax had something very different in mind when he invented that single-reed cousin of the clarinet in 1840. His attempt to bridge the gap between brass and woodwinds took hold of the musical world in ways he never could have imagined — including quartets of saxophones in four different sizes playing everything from Bach to Chick Corea. That’s what the Neo-Tessares Saxophone Quartet will be doing at Rocky River Methodist Church (19414 Detroit Rd.) on Sunday, May 22 at 5:00 pm. John Perrine, soprano, Josh Fern, alto, Thomas Lempner, tenor, and BettyJean Quimberton, baritone, who take their ensemble’s name from the Greek word for “four,” will serve up William Byrd’s Pavane for the Earl of Salisbury, J.S. Bach’s Organ Fugue in g (“Little”), W.A. Mozart’s Ave Verum, Isaac Albéniz’s Trois Pièces, Gabriel Fauré’s Pavane, and selections from Chick Corea’s Children’s Songs. No admission charge, but a freewill offering will be received.