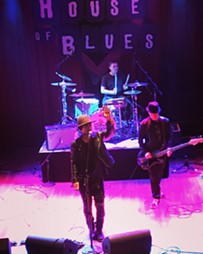 Supported by the energetic Los Angeles band Raw Fabrics, Justin Warfield and Adam Bravin returned to Cleveland as She Wants Revenge last night to play House of Blues. Since the concert took place on the same night as Game 6 of the NBA Finals, some Clevelanders clearly had decided to watch the game rather than attend the show.

However, the sparse crowd didn't hinder the band from delivering a passionate performance. The group probably desired a bigger crowd, but selfishly as a fan in that small crowd, having fewer people meant more room to dance.

In honor of the 10th anniversary of its debut album, SWR performed the album in its entirety. The dark thumps of “Red Flags and Long Nights” turned to the deep dance beats of “I Don't Want To Fall in Love” and “Out of Control.” Themes of lust and disappointment continued with “Broken Promises for Broken Hearts” and “Us.”

Another highlight came when Bravin played the instrumental "Disconnect" on his keyboard with the sound effect of rain pattering in the distance. As he stood alone onstage, the notes flowed through the room with a quiet reflective calm, like one raindrop slowly gliding down a car windshield.

Warfield is a charming frontman who made eye contact with fans while singing, then hypnotically swayed into slow, sensual dance moves, sometimes covering his face in a prayer motion with hands covered in black fingerless gloves.

“Tear You Apart” provided the visceral release of screaming the lyrics "I want to fucking tear you apart" into a dark room, the Goth version of shouting from a mountaintop. The concert’s main set closed with the desperation of “She Loves Me, She Loves Me Not,” the doomed yearning of a chance, a hope, a sign she may really love you.

Once the debut album was complete, the band played seven more songs, including “True Romance," "Written in Blood” and the Morrissey-esque “Take the World.” The set closed with “Rachel.”

SWR offers songs about unrequited love, that raw, one-sided puppy love turned obsession that won't let you eat, sleep or breathe — the kind of love that makes you want to lock yourself in your bedroom until the heartache is over except it’s never over and you cry forever while staring at a picture of someone who'll never love you back. You just want to be alone in your sorrow, listening to the sounds of someone else that feels your agony. And last night, She Wants Revenge was the cassette tape you kept rewinding until all your tears dried up, and you could once again face the world.