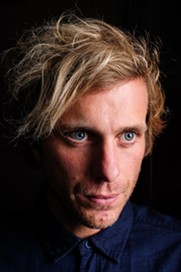 15 Minutes Public Relations
AWOLNATION had lined up a slew of dates for a headlining tour in support its latest album, Run, when Prophets of Rage, the new supergroup featuring members of Rage Against the Machine along with rappers Chuck D and B Real, asked them to provide support for their fall tour. As a result, the band canceled several dates to accompany Prophets of Rage. AWOLNATION, however, still plays House of Blues tomorrow night at 7:30.

“It’s a dream come true,” singer Aaron Bruno says in a recent phone interview when asked about the upcoming dates with Prophets of Rage. “Rage Against the Machine was like the Black Sabbath of my generation. They came at a time when it was a breath of fresh air. Public Enemy had already happened, which was a big deal to me as well. I remember listening to Chuck D’s lyrics over and over and that bass-y vocal and the power behind it. When I was first heard [the Rage Against the Machine song] 'Killing In the Name,' I thought Beastie Boys got a little harder. [Rage bassist] Tim Commerford has become a good friend of mine and has helped with AWOLNATION over the years.”

Bruno put together AWOLNATION back in 2009 after his various other bands had broken up.

“The bands before had been more traditional in terms of coming up with ideas together and voting on them and approving them,” he says. “Sometimes that works, and sometimes it doesn’t. For me, it had run its course, and it was refreshing to not have someone backseat driving my lyrics or melodies or how I wanted it to sing or sound. There had been too many cooks in the kitchen for long enough. Having said that, we had made some great meals together and made some dishes that didn’t work. Some of the bites were okay. This was the first time I had set alone to do it. By no means did I think that would be better or more successful. I did know it would be rewarding that I could see my vision all the way through.”

Though it didn’t become a success overnight, the debut album’s first single, “Sail,” found its way into TV shows, commercials and films. With its pulsating synthesizers and raspy vocals, the song sounds like a heavier track from alt-rockers Imagon Dragons.

“I like to think of it as a combination of every single song that I wrote that never happened and that had the potential to be good,” says Bruno when asked about the track. “There were songs that folks said would be the biggest single ever, and, of course, none of that happened. I always had a sense of melody and a sincerity. It all came together perfectly in an imperfect way. I finally had something to say. That’s a fundamental difference in this project versus the other bands. I was too immature to have a clear voice. I had to experience ups and downs to write songs that more people could relate to.”

With Run, the band slows things down. With its cooing vocals and piano melody, "Fat Face" could pass as a Beach Boys tune, and "Jailbreak" comes off as soul/R&B. Of course, it's not all mellowed out music. The band cranks up the guitars on "Hollow Moon (Bad Wolf)," a song that finds Bruno practically screaming.

“Hopefully, I have grown as a producer," says Bruno when asked about his approach on the album. "I do all the writing and producing and mixing as I go. I feel like I’ve improved. I wanted to push the limits. I didn’t want to write 'Sail 2.0,' but there are songs that tap into that emotion."

He says building upon the first album's success was a priority.

"I wanted to keep the train going," he says. "All odds were against me. When you have a breakout first album, everyone wants to be part of the shiny new toy and the second is different. It didn’t seem as easy. It’s like, 'We helped you on the first record, but we don’t feel like we need to help you on the second one.' Since we’re independent, even though Red Bull [Records] is a massive company, they’re still an independent label so we don’t have the same kinds of connections with majors who can offer the next Coldplay premiere or whatever it might be. We’ll always feel like the underdog, which is fine with me.”