23 Arrested So Far in Cleveland During RNC 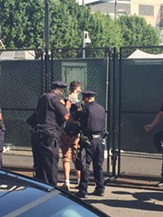 VINCE GRZEGOREK
This morning, Cleveland police reported that 23 people have been arrested so far during the RNC.

Only five Ohioans have been arrested.

Many of the charges involve failure to disperse, and most are tied to the attempted flag burning event at Prospect and East Fourth yesterday.

There's also Kathy Wray Coleman, who was arrested on Monday on the basis of an outstanding warrant. Officers encountered here while she was speaking on Public Square.

Note, while we're at it, that beds were left open at the Cuyahoga County Jail to house the hundreds and hundreds of arrests that were predicted for this week.