Your shipwreck sleuths at Scene are tickled to report that a team of underwater explorers has discovered what is believed to be the oldest commercial Great Lakes Shipwreck: the intact wreckage of sloop Washington — crusty pipe-smoking mariners like us still refer to her as Lady Washington — lost at sea during a bitter gale in 1803.

The team, led by shipwreck explorer savant Jim Kennard (a Steve Zissou of Lake Ontario if ever there was one) and underwritten by Toledo's National Museum of the Great Lakes, used high-res side scan sonar equipment to locate the vessel.

The Lady Washington, built in 1797 in Erie, Penn., is a relic of a lost time, when single-mast sloops were used commercially on the Great Lakes. The Washington transported merchandise and settlers between New York state, Canada and Erie. Kennard has a full historical precis over at Shipwreck World.

Chris Gillcrist, Executive Director of the National Museum of the Great Lakes tells Scene that funding shipwreck explorations like Kennard's every year is an important part of the museum's mission.

"These wrecks tell stories," he says, "and stories, hopefully, get people interested in the history, particularly young people."

Gillcrist says the museum prefers to target boats that are extremely old for historical purposes. The Lady Washington, for instance, which was discovered fully intact, allows historians and hobbyists to glimpse and better understand how boats were built in the 1790s, before photographs.

"And not just in 1797," Gillcrist says. "In Erie in 1797, which is different from how a boat might have been built in Buffalo or Rochester or Oswego. We want to find shipwrecks that expand our knowledge of Great Lakes History. Often, where ship is found illuminates what might have actually happened to it."

Gillcrist quotes the museum's tagline, that the Great Lakes represent 84 percent of the North American continent's fresh water: "And there's a different story in every drop."

There's also somewhere between 1,500 and 2,500 wrecks yet to be discovered in the Great Lakes, Gillcrist estimates, so let's all become nautical explorers, shall we?

The least we can do is re-visit Scene's infamous "Great Lakes Shipwrecks" slideshow. 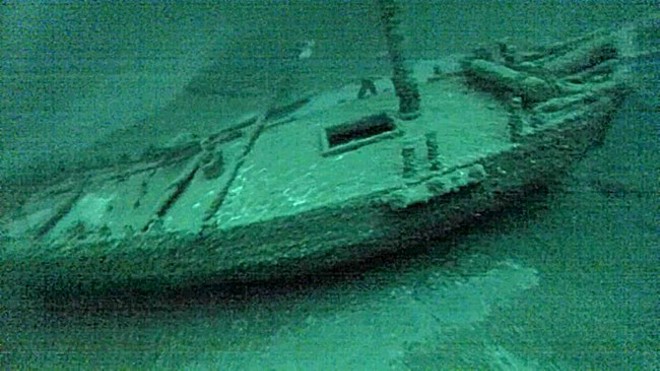