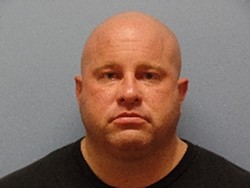 During the hearing, Bellevue Police Chief Mark Kaufman told the court, “He felt he was above the law.”

Check out fuller details in the original posts below.

(Updated 11/22/16): Suspended Sandusky County Sheriff Kyle Overmyer, who refused to resign after being indicted on multiple felony counts earlier this year and ran for and lost a re-election bid earlier this month, has pleaded guilty to 13 felony drug and theft charges.

Overmyer had originally faced 43 charges before the plea deal. He'd been accused of stealing prescription drugs from drop-off boxes and conning doctors into writing him prescriptions for pain killers.

(Updated 11/2/16): Suspended Sandusky County Sheriff Kyle Overmyer is, to put it in law enforcement parlance, a real piece of work.

Overmyer allegedly rounded up drugs from prescription drug disposal drop boxes, as well as deceived doctors into prescribing him painkillers.

For those and other offenses, he was indicted on some 43 charges back in August.

He pleaded not guilty and was out on bond.

Now a special prosecutor says he should be shipped back to jail while he awaits trial in March 2017, according to the Associated Press. It seems Sheriff Shitbag violated his release terms, specifically by having contact with witnesses in the case and in the Sandusky County Sheriff's office during his suspension.

His attorney has thrown out the "this has everything to do with the election and voting and not my client's shitbag behavior" excuse. Yes, he's still on the ballot. (Dear lord, Sandusky, please don't re-elect him.)

(Original story 8/24/16): Yesterday, Sandusky County Sheriff Kyle Overmyer was indicted on 43 charges by a grand jury. Of the 43 charges:

- 20 are drug-related. In all cases, the drug is a pharmaceutical opioid—Percocet, Hydrocodone or Oxycodone.

- 12 are related to the alteration, removal, destruction, etc., of records belonging to local, state or federal government.

- Five are for filing a false statement knowingly.

He has pleaded not guilty to all charges.

Overmyer has been ordered to turn over his gun, badge and have no contact with the sheriff’s office or any potential witnesses by Judge Patricia Cosgrove. Bond has been set at $150,000. The case will go to trial on March 6, 2017, if Overmyer makes bond.

An investigation began in 2015 after a number of local police chiefs expressed concern about the conduct of Overmyer in regard to his handling of prescription drugs obtained from take-back boxes across the county. In February earlier this year, Hamilton O’Brien of the Ohio Attorney General’s Office began the investigation.

Overmyer has been the Sheriff of Sandusky County since 2008, and is up for re-election in November. He is the youngest elected Sheriff in Ohio at 34.