Queen of Hearts Selected in Garrettsville, Winner Gets More than $3 Million 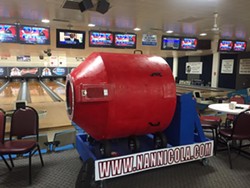 Facebook: @SkyLaneBowling
Update (9/26): The saga concludes at last. Sunday afternoon, a Mantua woman won the Garrettsville Queen of Hearts raffle, taking home more than $3 million when she selected the number five on the board and a Queen of Hearts was revealed.

After 51 drawings, the current raffle game finally draws to a close. Only three cards remained on the 54-square board that contained all 52 cards in a standard card deck, plus two jokers.

Skylane Bowling owner Aaron King has said he's going to take a few weeks off before he begins another iteration of the popular raffle. About 10 percent of the current pot ($340,000) will be placed into the next pot's winnings.

The raffle game has been a huge boon to the small town, but also a logistical headache as thousands of ticket-holders have flocked in on Sunday afternoons, due to a requirement that the ticket-holder be present when tickets are called. King changed that requirement, but nearly 5,000 people still showed up Sunday.

Update (9/19): A winning card was once again not selected in the Garrettsville Queen of Hearts raffle on Sunday, which means next Sunday's raffle could approach $3 million.

Via the Beacon-Journal, the number 42 was selected in Sunday's raffle on the grid of cards where only four options remained. Nearly 15,000 partied in the parking lot of Skylane Bowling before the winning ticket was drawn.

(Updated 9/12/16): The Queen of Hearts raffle game (the nuts and bolts of which you can read below) at the Sky Lanes Bowling Alley in Garrettsville is still looking for a winner.

Thousands arrived on Sunday, when the drawings are held, hoping to take home the $1.8 million prize. And, once again, thousands left with the money still on the table.

The jackpot is expected to hit $2 million next time around.

Raffle tickets are only available at the bowling alley. $5 for one or five for $20.

(Original story 9/6/16): To your right is an image of something called the "Lunar Queen." It's the tumbler — alleged to be Ohio's largest — that will be used Sunday afternoon in Garrettsville, Ohio, to shake, rattle and roll the thousands of tickets purchased in the popular weekly "Queen of Hearts" raffle game at the Sky Lanes Bowling Alley.

Here's how the game works: Participants purchase raffle tickets throughout the week. If their ticket is drawn on Sunday afternoon, they get the opportunity to turn over one playing card on the "Queen of Hearts" board, a board which, at the outset, contains all 52 cards in a standard deck, face down. If the ticket holder correctly picks the queen of hearts, they win the jackpot. If they don't, the pot rolls over and the sale of raffle tickets begins again.

Facebook: @SkyLaneBowling
Currently, only five numbers remain: 5, 36, 39, 42, 46. Those number correspond to the placement of the remaining cards on the board. One of them is the Queen of Hearts!

Though there was no drawing on Labor Day, Sky Lanes Bowling owner Aaron King estimated that the August 27th drawing, when the pot had eclipsed seven figures, brought the "largest crowd ever" to Garrettsville, 8,000-10,000 strong.

Per Ohio law, the winner must take home the entire jackpot, but even without a cut, the raffle game is a huge boost to Sky Lanes Bowling and the City of Garrettsville, which, among other things, suffered a devastating fire in 2014. As an additional incentive, Nashville recording artist Chris Higbee will be performing Sunday prior to the drawing.

And even if the Queen of Hearts raffle winner selects the wrong number Sunday, the 50/50 raffle is already up to $20,000.

On a related note, the Columbus Dispatch recently reported that Ohioans lost roughly $10 billion in legal gambling between 2012-2015.