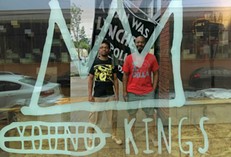 The local hip-hop act MuAmin Collective has been doing its thing around the city and beyond over the span of more than ten years. During some of the performances, the duo of emcee Josiah "Zion" Quarles and producer Aaron "aLIVE" Snorton occasionally rock with a live band. This planted the seed for their latest project, a entire live album with a four-piece band entitled DIG, which the band celebrates with a performance at 9 p.m. on Saturday at the Euclid Tavern.

"This one was a little bit different than everything else," says Quarles. "We had done a random hit back in the day at Compound Fest, which was mostly like a punk festival, and we did it for a couple years. We were pretty much the only hip-hop act. The third time we did the festival, we kinda wanted to spice it up. We talked to Neil Chastain [percussion] and Jake Wynne [trumpet], and they were down to play over aLIVE's beats and it worked out really good. So we were like, 'Let's see if we can do some more work.' Neil had a trio, and we started working with them a bit. Just hashing out some of the songs, mostly 'World B. Free' songs. We probably played about three or four gigs like that."

Through a mutual colleague, keyboardist Eli Hanley ended up coming into the fold after sitting with the group during a performance at NEOCycle. Mike McNamara on guitar rounded out the group's lineup.

"It was really about picking out the songs that we felt could be enhanced by using a live band," Quarles says. "It was a lot of trial and error, but we rounded out about eight songs we thought were really tight. We had also been working on some new stuff. We've got maybe half an album ready now, but in the process of working on that we had this song named 'DIG' that was half finished but I really liked it. I wanted the beat to be something different. aLIVE had another beat that had a soul sample on it and I wasn't sure if it was going to sound right without the soul sample. My brother Jungle Jim is in a group called LMNTL and he sings a little bit. He was sitting in on a session, and i asked him to sing the soul notes. He did and I said 'That's perfect!'"

"DIG" is the one brand new song.

"We did the recording at Paul Maccarrone's Zombie Proof studios," says Quarles. "It's all on tape. This was different because we didn't have a lot of time. We can usually marinate on stuff but working with gigging musicians, time is of the essence and everyone is on different schedules, so we had to lay out the whole thing in one session. We came back and did some mixing and Jake came in and laid some horns in because he couldn't make it to the session. Most of it was one take as far as the band was concerned. With the vocals, we had a little bit more time to mess with them."

For producer Aaron "aLIVE" Snorton, the transition to working with a live band was an easy one.

"There was an adjustment, but it was basically about communicating with the instrumentalists," Snorton says. "Sometimes the beat would be a little fast and I'd have to get them to slow it down. Just stuff like that. Josiah was tied into that too, but only to a certain point. He knew that he could put it off on me and I'd get it together because it was my production."

Saturday's release party will be part of the Cleveland Foundation's Uptown Saturday Nights series, and the group has something special planned for the show.

"We're going to do the whole album and we've got some other stuff that we're going to do." Quarles says. "Maybe 2 or 3 more songs. We've got [a song called] 'Off the Grid,' which is kinda like jazz-fusion. They're some young cats that I met who've played with other people but they're trying to get their own thing off the ground. Then there's RA Washington's project, Mourning [A] BLKstar, and I'm a big fan of that. "