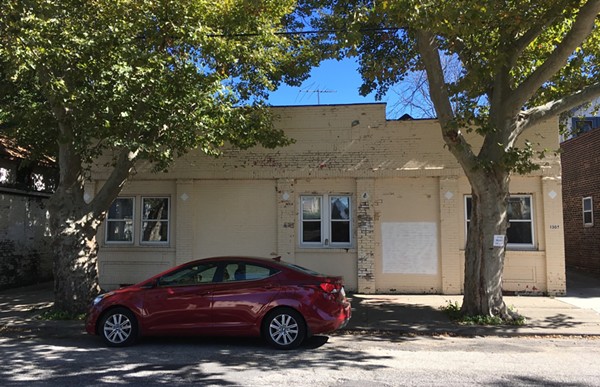 Along with partner Brian Moss, Holleran will be converting an old billiard hall turned apartment building on W. 65th – directly across the street from Stone Mad Pub – into Il Rione Pizzeria (1303 W. 65th St.). The name refers to neighborhoods or districts within larger cities. The two have been developing the project since they worked together at Stone Mad, where Moss now works as chef. Holleran is a counselor at Saint Ignatius High School by day, Irish musician by night.

Holleran grew up in Jersey City, New Jersey, and says that he’s been lamenting the lack of what he calls “real New York/New Jersey-style pizza” since he moved to Cleveland a decade ago. He and Moss have been working for years to perfect the dough and technique.

“My goal was to try and replicate Spirito’s in Elizabeth, New Jersey,” he says. “If you were to combine Spirito’s and Patsy’s Pizza [in New York], that’s the ultimate goal.”

To Holleran, pizza perfection is a 16-inch pie baked in a Blodgett deck oven. It comes out with a crispy bottom – “more like a baguette kind of dough” – and crispy crust enriched with a touch of olive oil. Toppings are kept to a minimum of six or seven options. The kitchen will add some salads, maybe a cheese plate, but nothing fancy or trendy, he assures us.

“There are so many creative people in Cleveland, but we are not those people,” Holleran says in a Jersey accent without a hint of sarcasm. “There will be nothing creative about our place. We are not trying to be fancy-pants, but we don’t want to be fast food either.”

There will be beer, wine and a full bar, but don’t expect a menu of Manhattans and Sazeracs.

“Gin and tonics for sure, but we’re not going to be muddling anything.”

The future pizza shop, carved out of a spacious one-story brick building that had housed a pool hall and a tavern before being converted into apartments in the ’40s or ‘50s, will accommodate about 35 to 40 guests when it's completed next summer.

Because this project has been percolating for so long, Holleran says that he and his partner have watched in trepidation as new places continue to open up all around them.

“Every time another pizza place or place that has pizza opens up we’d freak out and say, ‘Somebody else is going to be the pizza people here!’” he says. “But then we’d go down and try it and say that’s totally not us, this is not even close to who we are, what we want to do, and how we want to make it. I tried ‘em all and none of them cut the mustard, you know?

“We spent so much time researching and practicing. We don’t want to just be the best in Cleveland. We want to be the best in the country, including New York and New Jersey. We’re going for the gold.”