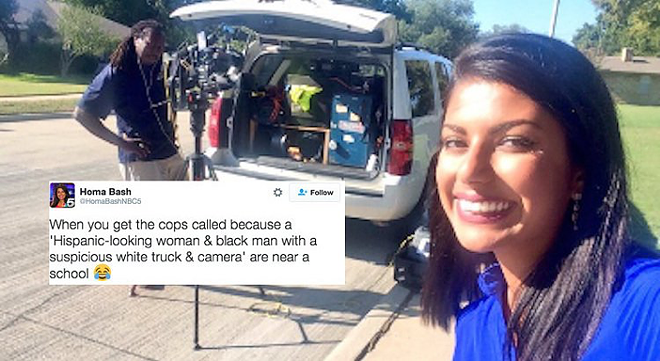 Homa Bash left the friendly confines of Northeast Ohio recently to go work in Dallas for NBC5. Things are a little less friendly down there, it seems.

Bash tweeted yesterday that she and her cameraman, C.J. Johnson, were filming near a local school. Someone ended up calling the cops on them because there was “a hispanic-looking woman and a black man with a suspicious white truck and camera.” Nevermind that Bash is Indian. Anyway.

Her tweet was shared tens of thousands of times and gave way to many reporting similar instances of racial profiling.

According to the Dallas Morning News, the responding officer quickly recognized there was absolutely zero cause for alarm, but a Plato police representative reiterated they do encourage the public to call authorities if they see anything suspicious.

Tilley said this wasn't the first time Plano police were called on journalists: It happened twice to a former TV reporter who is white.

He said his department regularly encourages residents to call the police if they spot something that they regard as abnormal in their neighborhoods.