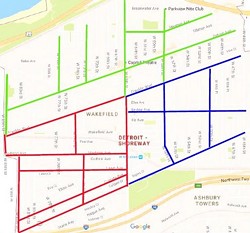 DSCDO
The three phases of the proposed security camera plan
There's lots of buzz around a proposed safety program in the Detroit Shoreway neighborhood — one that would see dozens of security cameras installed in public areas from Lorain Avenue to points north of Detroit. A crowdfunding campaign seeks $20,000 of the total $100,000 budget.

The idea comes from a number of community meetings and surveys in recent months. “Our efforts are really geared toward helping law enforcement, helping the prosecution, but also giving people a little bit of peace of mind," Jeremy Taylor, Safety and Community Engagement Coordinator of the Detroit Shoreway Community Development Organization, told WEWS.

As funds are raised, the plan would be implemented in three phases. The southwest portion of Detroit Shoreway would see cameras first, followed by the southeast portion and then the streets on the north side of the neighborhood. DSCDO, Cleveland police and the camera contractors would have access to the video data, which would only be tapped in the event of a reported crime.

Other neighborhoods — Ohio City, Tremont, Cudell — have gotten into the security camera game with some private crowdfunded elements.

Tonight, a fundraiser for the Detroit Shoreway program will be held at Banter (Detroit and West 74th) beginning at 5:30 p.m.