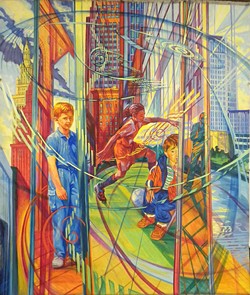 Seltzer
Twenty years ago, nine artists established what is now known as the Artists Archives of the Western Reserve (AAWR). Along with founder David E. Davis, these eight artists each donated works, ephemera and money to help establish the organization. Today the Archives includes 75 artists and approximately 5,000 works, as well as an active exhibition schedule and educational programming. This Friday, the organization celebrates the 20th anniversary of earning its 501c3 non-profit status, which it received in 1996. The event features a campus wide celebration at AAWR, the Sculpture Center and David E. Davis Studios.

“As I assembled my selections for this exhibition I was struck again by the individualism of each of these founding artists,” says AAWR Executive Director Mindy Tousley. “Each of their voices is unique – as a group they are held together by the strength and quality of their works, rather than a shared conceptual vision.”

Meanwhile, the Sculpture Center debuts two new exhibitions that both showcase creative collaboration, not just between the artists, but local arts organizations as well. Przemyslaw Jasielski and Rainer Prohaska’s Apparat: Retrogression through Technological Progress is a collaborative effort by two of the Cleveland Foundation’s Creative Fusion international artists. Jasielski (of Poznan, Poland) first exhibited at the Sculpture Center during his Creative Fusion residency in 2013. Prohaska (of Vienna, Austria) is currently in town as a Creative Fusion artist at Transformer Station. The exhibition is their latest iteration of “Nonsense Technology” exhibitions that are being shown across Europe.

Simultaneously, The Hum features the work of Felix Kalmenson (b. St. Petersburg, Russia; living in Toronto). The Hum is a SPACES R&D exhibition being exhibited at the Sculpture Center, in conjunction with the David E. Davis Foundation. Kalmenson and his collaborators create visual and acoustical representations of the unexplained, fluctuating sounds heard in Windsor, Canada that are emanating from a nearby U.S. island.

“To work with such highly innovative contemporary artists whose practices fall at the intersection of art and technology, one of the most forward thinking art forms today, and to strengthen the contemporary art scene of NE Ohio with collaborations with SPACES and the Transformer Station represents the very core of The Sculpture Center’s goal of supporting innovation and experimentation in sculpture,” says Ann Albano, Executive Director and Chief Curator at the Sculpture Center.

The campus wide 20th anniversary celebration takes place from 5 to 8 p.m. this Friday, Nov. 11, with remarks beginning at 6:15 p.m. At 2 p.m. on the following day (Saturday, Nov. 12), the Sculpture Center hosts Art Confronts and Considers Technology, a panel discussion with Jasielski, Prohaska and Kalmenson.

The 20th Anniversary Founder’s Exhibition remains on view through Jan. 14, but the exhibitions at the Sculpture Center end Dec. 17.