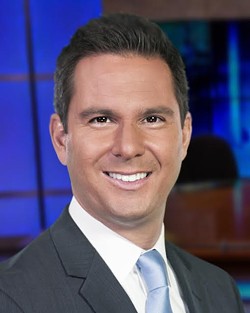 "I'm beyond thrilled to be the newest member of the Cleveland 19 [weather team]," Nicholas said in a press release. "I grew up here and I want to work here. I'm from Medina and I've worked on TV in Cleveland for 10 years, so continuing to grow my career in Northeast Ohio was a huge priority. I'm blessed to have found an ideal landing spot at Cleveland 19, and the chance to work and lead true professionals like Jeff Tanchak, Samantha Roberts, Jon Loufman and Beth McLeod is a dream come true."

Via Cleveland 19, Nicholas graduated from Ohio University and studied meteorology at Mississippi State. As Nicholas mentioned above, he's worked locally for the past decade, serving as a weathercaster at WEWS Channel 5. There, he became the first local meteorologist to be recognized as a Certified Broadcast Meteorologist by the American Meteorological Society. He won five Emmys as well.

Medina must be a hot spot for weathermen: Nicholas grew up down the street from Cleveland meteorological legend Dick Goddard, who retired last week. Nicholas said was inspired by Goddard's career.

"With Mr. Goddard’s retirement, it’s a new era in weathercasting in Cleveland," Nicholas said. "I’m really excited to be a part of it.”