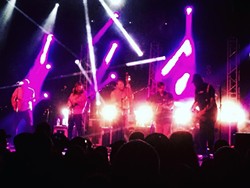 With their winter tour now officially under way — and the Cleveland 2017 concert calendar off to a fine start — Greensky Bluegrass dished up another excellent show last night at House of Blues. We've caught them a bunch of times over the years, and this seemed to be the biggest crowd they've pulled in our city. The mood was jubilant, and the jamming was top-notch. We expected nothing less.

Something that came to mind during last night's show was how Greensky is able to reel in such a diverse audience; this is sort of an all-ages affair, much like many of the festivals that the band plays throughout the year. And while there was plenty of kind bud being passed around in the pit, you could tell that Greensky's music also brings more straight-laced strings fans to their shows. (Cleveland.com even managed to publish an interview with them, signalling maybe their first ever foray into the jam scene?)

One particularly nice moment was the While Waiting > Midnight Mass for Albert in the first set, the former being a new tune that Scene had been hoping for.

But the main attraction was the improv, and we'll submit that dobro/"drop-steel" player Anders Beck stole the show with his fiery solos and nuanced fills. He and the rest of the band bounced between contemplative tunes (like While Waiting) and genuine hootenannies, as one fan said to Scene right before setbreak.

Greensky is getting bigger, and they'll be sure to return to Cleveland before you know it. Don't miss 'em.