5 Concerts to Catch This Weekend 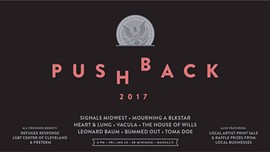 Local indie rockers Signals Midwest are among the group of local acts performing at this concert which will also feature a print sale of artwork from local artists, a raffle with prizes from area businesses and nonprofit organizations providing information about their services to the community. The purpose of the event held on this darkest of days? Promoters hope to "raise awareness and funds for organizations that will be greatly affected by non-inclusive and regressive social policies" that President Trump and his confederacy of dunces plan to put into place. All proceeds benefit the Refugee Response, the LGBT Community Center of Greater Cleveland and Preterm. Promoters also hope to "provide a platform for individuals to discuss opportunities for civic and political engagement that benefits the community and people around them." (Jeff Niesel) 6 p.m., $8. Mahall's 20 Lanes.

Shortly after the release of its 2008 EP A Whisper, A Clamor and a 2010 self-titled full-length, the local indie rock act the Lighthouse and the Whaler went through some lineup changes and added multi-instrumentalist Mark Porostosky, Jr. In the wake of those lineup changes, the band has subsequently thrived and become a national act. In addition to playing with Lighthouse, Porostosky also fronts the sideproject Poro. The band celebrates the release of its new EP, Treat Yourself, with tonight's show. The EP contains six songs, most of which address “the freedom to be confident in oneself." This is the first of two Poro EPs slated for release this year. The second EP has been partially recorded and will follow this release later this year. Fellow Lighthouse bandmates Ryan Walker (bass, banjo) and Thomas Ulle (drums) also play on the album. (Niesel), 8 p.m., $10. Beachland Tavern.

For his current 23-date "One on One" tour, San Francisco-based DJ Worthy has enlisted artists and friends such as Ardalan, Billy Kenny, Christian Martin, Gina Turner, Golf Clap, J. Phlip, Justin Martin and Kevin Knapp, to name a few, to accompany him. The Cleveland date, which takes place tonight at 9 at Touch Supper Club, will pair Worthy with Sepehr. Worthy says he's goes "back and forth between wanting to make some house-ier stuff and something edgier." "I do something fun and then want to pull it back and then want to make something more aggro," he says. "For the show at Touch, I’ll play some of my bass-y records and then bring it down and bring some more melodic chord-driven stuff. I love all those aspects, and I like to take fans on a journey.” Tickets to the show are $10. (Niesel). Touch Supper Club.

Not many of the alt-rock and hip-hop acts that MTV made famous in the '90s are still kicking. G. Love & Special Sauce is the exception. Twenty years ago, the singer-guitarist G. Love and his two-piece band released their self-titled debut and had an instant hit with the woozy blues-meets-hip-hop number "Cold Beverage." In the two decades since that album's release, Love and crew have consistently toured and recorded; they received a good second wind in 2003 when Love and singer-songwriter Jack Johnson collaborated on the Johnson tune "Rodeo Clowns." Love's 2014 album reunited him with Special Sauce guys James "Jimi Jazz" Prescott and drummer Jeffrey "The Houseman" Clemens for the first time in eight years. The group's been going strong ever since and dropped the noisy Love Saves the Day in 2015. (Niesel), 9 p.m., $25 ADV, $30 DOS. House of Blues.

One of the more prolific local artists, local rapper Toobe Fresco (formerly C-Ro Del Fresco) admits he’s not sure how many singles and mixtapes he’s released over the past several years. At a time when local rappers come and go, Fresco, who grew up on Cleveland’s east side and started the hip-hop group 3 Kingz back in 2003, has been a consistent player on an ever-changing landscape. He’ll debut his new band, the Living Sound, a group that includes Gawaun Willams, TJ Robinson and D'Gregory Richmond at tonight's show. The band will play mostly play songs from last year's solo effort, Let Us Dream. The group hasn’t’ yet written new material, but Fresco hopes the band will back him on his next release. Billed as "Fresco and Friends," the Grog Shop show will feature opening acts the Scenic Route, Dre Mickel, Paris Laná, Okayché, LeBron Nelson and Darvon. Fresco picked all the accompanying acts. (Niesel), 8 p.m., $10. Grog Shop.