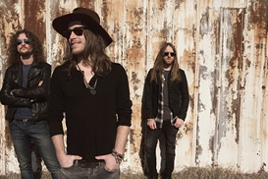 Big Machine Records
The guys in the Nashville country rock act the Cadillac Three grew up listening to a wide range of music. Sure, they liked all the country that came out of the Music City in the ’80s and ’90s but as “rowdy” teens, they also gravitated toward the hard rock that was popular at the time.

“When I was a kid, I was growing up on ’80s country and then got into classic rock and metal stuff,” says lap-steel guitarist Kelby Ray during a recent phone interview. “[Singer-guitarist] Jaren [Johnston] is the same way. He grew up on ‘90s country and loved Metallica and Rage Against the Machine and Skynyrd and all that stuff. [Drummer] Neil [Mason] too. We like the same things.”

The guys all played music since their middle school days and would play in a variety of different bands before forming Bang Bang Bang in 2005, a group they’d rechristen American Bang after signing a record deal with Warner Bros. Thanks to a killer live show, the band had crossover potential. It played at alt-rock festivals such as Lollapalooza and Bonnaroo.

But the folks at Warner Bros. didn’t back the hard-rocking approach, and band and label eventually parted ways.

“It was a good learning experience,” says Ray. “It was five to six years of going through our first record deal and touring in a van and really getting out there. We were changing tires and replacing transmissions and as far as the record label stuff goes, we had to learn to stand up for ourselves. During that time period, people were pulling us in different directions. They were telling us to write songs like this or that. When it ended, it was a mutual thing. Politics is why we left the record label. We learned a lot and just started over.”

In the wake of its dissolution, the trio reconvened to form Cadillac Black, which they’d then rechristen the Cadillac Three when they signed with Big Machine Records in 2011. The group issued its self-titled debut in 2012 and followed it up with last year’s Bury Me in My Boots, an album that shows off Johnston’s songwriting chops.

Both albums have become hits, and the group recently garnered an American Country Music Event of the Year nomination. Johnston also recently earned Grammy nods for songs he wrote for Dierks Bentley and Tim McGraw.

“Big Machine couldn’t be more on our side,” says Ray when asked about the band’s reincarnation as the Cadillac Three. “They let us be who we are and do what we want to do. Now, we’re on a tour bus, which is better than the van. We rebranded the band, and now we’re doing what we’ve wanted to do since the beginning. I guess it’s working. Now, we’ve been doing the Cadillac thing for as long as we’ve done the Bang thing and now we have just moved on in our own direction.”

Ray says the band didn’t intentionally intend to mimic ’70s Southern rock but says that some songs certainly came out that way.

“We just decided we would do what we wanted to do,” he says. “If one song sounds more Southern rock, that’s cool, or if one has a Metallica riff, that’s cool. If one sounds like an old country song, that’s cool. I think that’s why we have such a wide fanbase and why people keep coming back. Our live show has grown. We have a new stage set up and lights and we keep everyone wanting more. We have people who are 17 to 70. We have the ZZ Top and Skynyrd fans and the people who saw us on tour with the Florida Georgia Line, so they’re all over the place.”

Ray says he’s not surprised that Johnston has become a sought-after songwriter.

“He has a unique voice and has learned how to craft a song in his own way,” he says. “It’s turned into something that people in Nashville want to be a part of. I told him when he first started learning to be a songwriter that he was the one knocking on everyone’s door trying to write a song with them but that eventually he’d be the guy where everyone was trying to knock his door down. That’s exactly what happened. It’s practice. He and Neil [Mason] do a lot of songwriting on their own and we do a lot together. Those guys grind it out everyday. They’ve learned how to craft a song. It’s not as easy as you think it would be. He just developed his own style. It’s definitely cool and different. It’s just something that everybody wants to be a part of.”

According to Ray, the band only spent about a week recording its first album. So when it came time to cut the follow-up, band members wanted to take more time. Having spent countless hours on the road as both American Bang and the Cadillac Three, the band drew upon its touring experiences for some of the tracks.

“A lot of the songs came from experiences on the tour bus and doing the next level of rock ’n’ roll,” says Ray. “It’s about growing up and getting a little bit older. Some of the songs are a little bit more mature. [Mason and Johnston] have learned so much about crafting songs. If you look at songs like ‘This Accent’ and ‘White Lightning,’ they’re different songs. And yet, there are still party songs like ‘Party Like You’ to keep the core fans happy.”

The group recorded the album in bits and pieces. It started with “The South” and “White Lightning,” the tracks that would become the first two singles.

“About half of it we did with Dann Huff, who’s a super cool guy,” Ray says of the producer who’s worked with acts such as Keith Urban, Hunter Hayes, the Band Perry and Cassadee Pope. “He’s a chilled out guy and a great guitar player too. Him and Justin Niebank, who engineered and mixed it, did half of it. We also did half by ourselves with an engineer who just pressed the buttons. It was cool to do a little bit of both. That’s how we did the first album. We went into the studio by ourselves with an engineer and just hit record. We pieced it all together over a few years. We didn’t go in and do it all in one big chunk.”

With its distorted vocals and snarling guitars, “Buzzin,’” one of the highlights on Bury Me in My Boots, has a real eerie feel to it.

“[Johnston] brought it in the studio one day,” says Ray. “We listened to the demo and did our own take on it. I think we did that one with Dann Huff. It was a cool, vibe-y thing. We wanted it to sound like Damn the Torpedoes, or at least like a really old, cool Tom Petty song. That’s the inspiration behind the sound of that one. That one is fun to play live. It’s a drinking song but it’s also a love song too. Pretty much all of our songs are love songs wrapped around drinking songs. That’s country music, right?”

For the anthem “The South,” a tribute to the band’s roots, the group teamed up with Florida Georgia Line, Dierks Bentley and Mike Eli, all of whom provide the raucous backing vocals.

“That was a lot of fun,” says Ray. “That was one of the first ones we did with Dann Huff. We started throwing around ideas, and we thought it would be cool if we got a couple of people on it. We shot some text messages out. Mike Eli happened to be next door in the next studio. He came by. Jaren and Dierks are friends, and we’ve been friends with the Florida Georgia Line guys since they became a band too. Thomas Rhett wanted to be on it, but he was out of town that day, and it was the only day we could do it. He was very upset he couldn’t do it. It was a lot of fun. They showed up at the studio, and we opened up a bottle of tequila and did some shots. It was a fun day and was just a funny idea, but the stars were aligned that day. We close the live shows with that song each night. It’s a huge sing-a-long.”

“It’s kind of like our second marriage with the same dude, for lack of a better way of explaining it.”