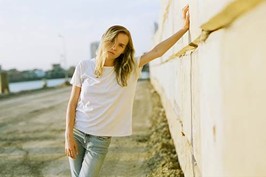 Besides a trip to Los Angeles, the Japanese House – the solo project of English singer-songwriter Amber Bain – had never been to the states before last year. But starting this week, she begins her third North American tour of the last ten months, tacking onto an arena tour last spring opening for labelmates The 1975 and her own headlining run in November and December.

Speaking on the phone from a recording studio in London and struggling to even remember what day it is, the introspective and forthcoming East London-based 21-year-old feels like she’s living in a movie.

“You end up in a weird blur where you can’t actually remember where you’ve been,” she says of this past year. “Especially if you’re jetlagged, it’s just the weirdest thing. And obviously, you grow up listening to American accents because they’re in films and stuff, but when everyone around you has an American accent, it feels like you’re in a film. Like, this is what the movies are like.”

This tour, which begins February 21 in Columbus and comes to the Grog Shop on February 22, has her cutting a slightly less cinematic path through middle America. She will play dates throughout the Midwest before venturing down to Florida for a festival and out to the West Coast in March.

This heartland expanse of the country, however, has an unexpected appeal to Bain, whose prior travels through the states imbued her with an appreciation for its natural majesty.

“I found a lot of America just really chilled out compared to its cities. I found it really beautiful. Some of the drives are just insane — obviously, when you think of national parks. But you don’t think about driving on the motorway and it just being, like, stunning, which it was a lot of the time.”

For those familiar with Bain’s music, this sentiment and admiration may not come as a surprise. With three EPs under her belt, Bain has established a sweeping blend of synth-pop that suggests these forlorn gazes on the rumbling open road. Her layered, complex sound balances the snowy vocoder harmonies of Bon Iver and the warm, simmering, bittersweet pop of The 1975 into a reflective, hypnotic package.

Like the visuals of snowy Icelandic scenes that accompanied her first EP or the sunny island cast in a faded, pastel aura that provided the setting for a recent video, Bain specializes in creating an immersive atmosphere in her recordings. Her sonic landscape is kaleidoscopic: heavily layered vocals, occasionally dissonant harmonies, organic and electronic sounds that arrange and rearrange themselves in ebbs and flows.

Bain grew up west of London in Buckinghamshire and Hertfordshire counties, bouncing around towns that were essentially non-descript. “It’s very normal,” she says of the region, “It’s your average town. There was a park and everyone just hung out at the park. And then there’s a shed that everyone smokes in. I wasn’t in a shithole wanting to break free.”

She credits her father with introducing her to Led Zeppelin and AC/DC, and quickly added the Beatles, the Beach Boys and Frankie Valli and the Four Seasons as pillars of her musical education.

“My music was born out of nothing else other than a love of other people’s music and wanting to understand how they did it. I was obsessed with music and was like, ‘Well, might as well make some of it.’ I realized I actually could write songs and I found it quite easy at the beginning.”

Bain’s musical career kicked into high gear through a chance encounter with The 1975, the mercurial indie rockers from Manchester who have topped charts in the UK and the U.S. over the last five years. After attending their debut London show in 2012, a friend of hers began dating their lead singer, Matt Healy. The friend eventually played some of Bain’s music for the band and, shortly after, Bain inked a deal with their label, Dirty Hit.

As evidenced by her three releases thus far, Bain has embraced the resurgence of the EP as a format. Her three EPs – 2015’s Pools to Bathe In and Clean and 2016’s Swim Against the Tide – tallied four tracks each.

“EPs are great because they’re so small and it’s like an experiment. Bite-sized chunks of music are easier to digest, and as an artist, that gives us more of a chance to do something really weird. You can tell yourself, ‘It’s not an album, it’s an EP, so let’s do something weird.’ ”

While she has enlisted production help from The 1975’s Healy and George Daniel, her own fingerprints are all over these projects, especially in the deeply personal content.

“I write about relationships and loss,” she says, “Human connections and lack thereof.”

And her experiment has paid off: she was tapped to perform at a number of festivals across the UK and Europe last summer and longlisted for the BBC’s prestigious “Sound of 2017” list.

Yet as she writes and records, Bain finds things a bit more difficult as she’s down to the last EP in her four-part series, and her debut album looms.

“It’s hard to specify what is going on what. I might turn around tomorrow and go, ‘Actually, this song I wrote for the album I’m going to put on the EP,’ or vice-versa. The album is a bigger deal – I want it to be very together and have a certain feel to it. I like it, but I’m quite fussy with music. It’s a harder thing to do – to make an album that from start to finish is a solid thing in its own right. And that’s what I’m aiming to do.”