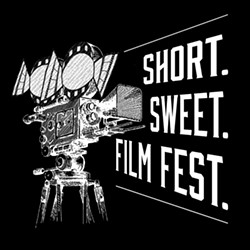 Over the years, the festival has grown bigger and bigger, so Suglio moved it to the Alex Theater at the Metropolitan at the 9, where it’s set to return the first weekend of March.

From Friday, March 3, through Sunday, March 5, the fifth annual festival will showcase some 96 films. In addition, musical acts will perform after the films on Friday and Saturday nights and on Sunday afternoon.

The festival opens with a Local Filmmaker’s Night that takes place from 7 to 10:30 p.m. on Friday. The opening film, “Draw Hard,” documents the life and times of John G, the local graphic artist who designs The Lake Erie Monster comic series.

“It’s a great movie,” says Suglio, who sifted through more than 200 submissions before picking the final movies to screen. “I knew nothing about John G. before I watched the movie, but the film is really cool.”

Friday night will also include a screening of the Western flick “A Man Willing to Kill” and the Robert Banks’ experimental short, “Make America Great Again … and again … and again.”

“It’s really out there and really different from his other films,” says Suglio. “I’m glad to have him represented in the festival — he’s one of Cleveland’s best filmmakers.”

The doors open at 11 a.m. on Saturday, March 4, and films run from noon to 9:30 p.m. Live music and a filmmaker's networking/social event follows. One Saturday highlight: "Madaran," a film about an Iranian mother forced to make a decision about the fate of her son’s killer.

“I thought it was shot in Iran, but it’s shot in the U.S. and filmed in the U.S.,” says Suglio when asked about the film. “It didn’t get nominated for an Oscar, but it was on the short list. It’s the most awarded and recognized film I’ve ever shown. The film is fantastic.”

Doors open again at 11 a.m. on Sunday, March 5, and films run from noon to 8 p.m. A live band will perform during a short intermission at 4 p.m., and several international films will screen. Suglio again worked with the Short Shorts Film Festival & Asia in Japan.

“They sent me a ton of great films, and they’re phenomenal,” he says of the international films the organization sent his way.

The evening concludes with showings of the award winners.

Musical acts such as Christopher Black, Nate Jones and Trihearn will perform on Friday, Saturday and Sunday respectively.

“The festival is very consistent,” says Suglio. “I know what I’m doing, and attendance is reliable at this point too. The 9 has been great. We’re trying to bring to light up-and-coming artists and films that engage and capture that independent passion for making films. I feel like the films embody that whole mindset.”

All patrons can come-and-go throughout the festival as long as they keep their wristbands on.

Tickets, which range from $20 for a single day pass to $40 for a three-day pass, are close to sold out.