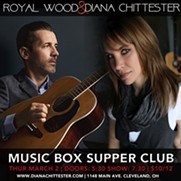 A few years ago, singer-songwriter Diana Chittester moved to Cleveland from Pittsburgh, and started playing open mic nights at places like the now-closed Winchester. She released her first EP in 2008 and followed that with 2012's In This Skin, an album which features local Cleveland blues musicians.

She continues to play the local circuit and is currently at work on a new album.

Now, Chittester has teamed up with Toronto-based singer-songwriter Royal Wood for a co-headlining tour that includes a few dates in the states and a few north of the border. In separate phone interviews, the two talk about their respective approaches to singing and songwriting.

Talk about how the idea for the tour first came about?
Chittester: There are music conferences that my agent Jessica and I attend. I showcased at one along with Royal Wood. While we were there at the Ohio Artists Presenters Network, we connected really well. We realized we had enough similarities but also enough differences to really complement each other. Royal was looking to come to the U.S. to do a tour, and I was looking to go to Canada to branch out a little bit. It seemed like a good match for us to team up and start conquering that border.
Wood: It was something my team helped put together. They liked the idea of that bill. To be honest, I don’t remember which side made the pitch first, but once they did, I checked out her music and definitely approved. I’m excited about the tour.

What are some of the similarities and differences in your music?
Chittester: A big thing we both do when performing solo on stage is create the show entirely on your own. A lot of storytelling helps to engage an audience. That’s something we both do. Royal is good at engaging the audience and sometimes having them sing along, and I will walk out to the audience and sit there while I perform. Even if it’s just us on stage, and we’re in a big theater setting, you can feel like it’s one-on-one. In terms of the differences that complement each other, I bring an energy to the show. I’m a little more animated with a rock edge and my guitar does a lot. Royal is a multi-instrumentalist and will play piano or ukulele or guitar. He plays whatever he thinks is best for the song. His melodies really get stuck in your head.
Wood: I think we come to music from the same side of things. We’re organic and real. It’s not computer tracks. We’re lovers of music. It’s not the pop world. For that, it’s the perfect bill. I jump around from piano to guitar to ukulele. It’s part of what the performance is. I tend to play most of the instruments on my album, so when I go out on tour, that’s what I tend to do.

Talk about what first drew you to singing and songwriting?
Chittester: I started playing guitar at 14, and my dad taught me chords. He told me to make up my own songs to learn the chord changes. When I was in high school, I started writing and performing for friends. It’s the time I made myself sit down and think through the emotions I was feeling and things I had witnessed or experienced. It’s a moment that starts with just me. Now at this stage, sharing the stories and being able to present the songs, there are so many people who feel that connection. It's transformed into something personal that makes me connect with other people. That’s the drive that keeps me going.
Wood: I was one of those kids who followed his bliss. I had friends who picked up a hockey stick and others who were good at math. I started playing when I was 4. There was a piano in the house, and I loved it. My parents bought a few instruments. There was a guitar and a banjo and a harmonica. My dad loved music so much, and it's always what I wanted to do.

Do you remember the first song you ever wrote?
Chittester: There was a first song called “Angel,” but there was one called “I Can Do It Again.” It was a “hit” song on the talent show at my high school. That’s my little claim to fame in the town in Pennsylvania where I was living at the time.
Wood: I do. It was horrible. I was in grade five. I performed it with my three best friends. I played piano and sang and they just stood there. The first lyrics that lead into it was “it wasn’t easy when you broke my heart and walked right out the door/please come back to me.” For a kid in grade five, I wondered what he was thinking about it.

What do you consider as your key influences?
Chittester: Ani DiFranco is one. She not only transformed my guitar playing but taught me to transform my voice. She talked about whatever she experienced. That could be any experience. She just put it out there. She helped me find that in myself. Lindsey Buckingham is the second influence. He’s a brilliant guitar player. The precision he plays with shaped the things I learned from Ani and took them to the next level. I had some bad habits and he developed my guitar playing.
Wood: I was listening to Dylan and Leonard Cohen and Cat Stevens and Billy Joel and all these amazing ’60s and ’70s singer-songwriters when my friends were listening to New Kids on the Block. I had such passion for lyrics and a song and a story. Thinking back on it, it makes sense but it was probably bizarre at the time.

You plan to play some new songs at the show. Talk about those.
Chittester: I finally have a new album in the works. I am going to record when we get back from the tour. I’ve been investing in recording gear to do it on my own. The new music reflects that decision. I have a song called “Freedom,” which was written on ukulele. I wrote it after being at this friend’s party and hearing people complain about their lives. I wrote this song about breaking free from the path we have to take in life and pursuing the path that makes you happy. There’s a follow up song called “On My Own.” I pursued my dream and am happy with my decisions but there have been hard things along the way that made me question the decision to pursue passion over job security. The song deals with the darker side of that. I’m stepping back from the entertainment end. Some of the past songs just showed how well I could play the guitar. This album shows there are other emotions I go through. The new song “Paradox” is a prime example of that. It’s simple and will leave your heart split in half if I execute it properly.
Wood: I tend to try to play as many as I can from the latest offering. Those are the songs that I get most excited about too. I plan to try out some new songs for the record I’m recording right now, which won’t come out until next year. [Last year's] Ghost Light is the most organic and genuine throwback record I’ve made. I didn’t intend to make a record. I was in L.A. and was doing some songwriting and production for other people and I had some time during my week off and went into his studio. I had a bunch of songs written. We did a song a day for that time. We planned another two weeks and I came back to L.A. and we did the same thing. We didn’t work with an A&R guy looking for a new single. It felt like it did when I was making music when I was a kid. It felt amazing. It was just me being myself. I plan to take that approach next time too. I’ve been working in UK and New York and also back in L.A. It’s the same approach. I’m just recording it from morning to night. I think that just feels honest and good to me.

What are the challenges of trying to get people to come out to hear live music in this day and age?
Chittester: For our Stocker Arts show we just played, there was an ad on NPR. My friends would hear me on NPR, and they would follow it up with a question about when I was playing. It didn’t seem to click to come to the show. It is a big challenge. People in the arts are dealing this because something happened with my generation. We have a good older crowd that will come to shows and buy CDs. We have a hard time getting younger people there. We use social media and send out personal text messages. Word of mouth is what helps us. We work to stay as engaged with anyone who comes out. I don’t like the word “fan” when I talk about my audience. I think of them as friends and try to remember them if I see them again, so there’s something more personal at work. I think they call that grassroots.
Wood: The challenge has always been there and it’s going to remain. It’s a free commodity now. It’s not even a commodity. It’s just free. To get someone to a show, they have to discover you on YouTube and college radio and licenses for TV and film help. But it’s back to the days of building the audience through your performance. I love taking the show on the road, and getting to travel is amazing. You only have a song or two to win the audience over, and I like that challenge.