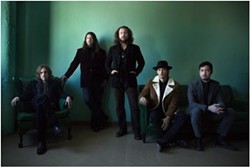 When indie rockers My Morning Jacket came to town two years ago in support of The Waterfall, the band put on a thrilling show at the State Theatre.

Led by big-voiced singer-guitarist Jim James, the band began that concert by performing behind a giant white screen as it launched into “Believe (Nobody Knows),” the proggy opening number from the album. With its upper-register vocals, the song sounded a bit like a leftover Yes tune from the ’70s. Not that James in any way physically resembled former Yes singer Jon Anderson. Wearing shades for the entire two-hour concert, the bearded, long-haired singer looked more like Jim Morrison as he sauntered across the stage in a black jacket imprinted with some colorful psychedelic swirls.

The band returns to the road this summer with a headlining tour that includes a June 23 date at Jacobs Pavilion at Nautica. The Record Company will open the show.

One dollar from every ticket purchased will benefit My Morning Jacket's Waterfall Project, which is “dedicated to supporting and promoting actions, big and small, for positive change in the world.”