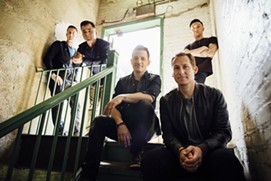 One of O.A.R.’s earliest songs, "That Was a Crazy Game of Poker,” originally came out on the band’s 1997 album The Wanderer. With the twangy first half of the song in which Marc Roberge sings in a bit of a drawl about how he’s “gotta throw it all down and kiss it goodbye,” it continues to be a fan favorite that the group always plays live.

Expect the Ohio-based band to bust it out when it performs at the Flying Horse Farms’ Campfire that takes place on April 22 at the Tinkham Veale University Center. Ohio native and America’s Got Talent star Caly Bevier will open the show.

“We’re thrilled to offer people throughout Ohio the opportunity to enjoy an awesome night while supporting our campers,” says Flying Horse Farms CEO Mimi Dane in a press release announcing the event. “It’s a win-win.”

The event, which runs from 6 to 11 p.m., will include cocktails, food, live music and "inspiration."