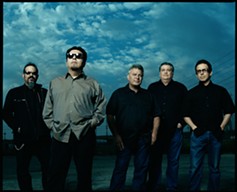 One of the group's most diverse and accomplished records, the album opens with the shimmering “Dream in Blue” and then shifts gear to include the roadhouse rock tune “Wake Up Dolores," the grunge-y blues number "Whiskey Trail" and the beautiful ballad “Saint Behind the Glass."

Co-produced by Mitchell Froom, the exquisite album features a wide range of music and offers a unique blend of studio trickery and organic instrumentation.

To honor the album’s 25th anniversary, the band will play Kiko in its entirety during the first of two shows at the Music Box Supper Club. For the second show, it’ll play a greatest hits set.

“To be honest, this will be the first Kiko show we’ve done in some time,” says multi-instrumentalist Steve Berlin in a recent phone interview. “It was a request from the club. It’ll be different. We did a few of those 20th anniversary shows where we played the whole album, but it’s been a couple of years since then. We’ve integrated some them into the set over the years so it shouldn’t be a big learning curve. When we did do Kiko in its entirety, it was fun finding the nuances of the songs again and playing them in sequence.”

When we did the record, about half of it we did as demos that turned into the songs on the record. When we went into the studio to finish it, it became a different thing. “Dream in Blue” was one of the first we did with [engineer] Tchad Blake and [producer] Mitchell Froom. I think Pete Thomas, who played drums with us on the record, came up with a Jamaican riff on the drums. It just fell into place easily in a really cool way. The whole record was kind of painless really, but that one was kind of a jam that turned into a song.

That was one that is less of a jam. We had to compose that one. The horn stuff came a little later, if I’m not mistaken. That was one of the last things that came on it. It has a lot of moving parts. It’s funny because when we go back and listen to it, I can’t imagine us tackling something like that now. I guess we were younger and dumber then. Things that seemed daunting to me now. Back then, I guess we just jumped in and went for it.

That was one that we did in demo form that turned into a master. When we did the demos, we recorded them at our studio in downtown L.A. on Fifth Street. That part of town has since become a spend-y part of town. Back in the ‘90s, it was a really fucked part of town. We had to park, and you’d walk by people living in boxes, and they were downtrodden folks, and the song was written for them. It was heartbreaking scenario. That’s what the song is all about. There were guys who would wash our cars, and a guy who worked at the building who would help us load in and out.

That one has been in the set list forever. We do that quite a bit. It’s a César [Rosas] song. It’s a typical bluesy number with a few twists and turns in it. It’s kind of a showstopper. In a normal set, we wouldn’t sequence the show the way the album is sequenced. In a show setting, we would move to the big finish. This way, the “big finish” comes at the middle of the set, but it seems to work.

“Kiko and the Lavender Moon”

Dave [Hidalgo] came up with that incredible riff. That one defined the record once it showed up. Once we did it, it put everything in place for us. Every record has to find its own heart, and that one is the heart of this one. Once you find that heart and have that thing that defines the rest of the record, everything else falls into place. That was this one.

“Saint Behind the Glass”

The imagery is from Louie [Pérez's] childhood. It was in his mom’s home while growing up. He wanted to know what the world wuld look like fro that perspective. Louie is in touch with his memory from a child, so the imagery comes from that.

I think Reva is a real person. It’s another one that I can’t imagine doing a song like these days with all its chords. The stuff we do these days is a lot simpler. I am going to have to write out the chords for it. It’s like, “Holy shit. What were thinking?”.

“When the Circus Comes”

That was another one that we did in demo form. It has a similar flavor to “Angels.” They were done in the same copule of days when we were demoing the stuff. They all pointed us in this direction and the end of that vector was Kiko. We were finding out vocabulary. This one is one of my favorites.

It’s a good one. Dave [Hidalgo’s] family is originally from Arizona. His mom was born in Bisbee or somewhere near the border. There have been a couple of Arizona songs from over the years. It’s an underreported part of our history.

“Short Side of Nothing”

That’s one that comes up frequently in our sets. It’s in the general rotation. I guess the ones that aren’t in the rotation are the ones that are hard. We’re going to have to rehearse the hard ones before the show.

This is another César  tune. It’s in the rotation, so we don’t have to rehearse it. César likes rain and uses those images.

That’s a fun one. It’s a really short song on the record, but we stretch it out when we play it live.

That’s a killer one. That’s a show stopper. Usually, every guitarist will solo. It’s guitar wanking, I suppose. People seem to like it a lot.

That one is all the more trenchant of a song these days, I would say. That’s a heavy tune. We don’t play it a lot but I always enjoy playing it.

It’s an original. It is an actual place but people don’t actually go there. It’s a Los Angeles river, and it’s a trickle. When you get one little rain, it turns into a raging river. We have a couple of rivers like that. Your morning piss is harder than these rivers. It’s a waltz, and that’s one we also recorded with Super Seven, a band that features Dave, César and myself. We just did a show over the weekend at South by Southwest, and it was kind of fun. On Kiko, it’s a short thing. On the Super Seven record, it’s rather long. I think we’ll do the long version when we play it at the Music Box to give it more heft.