NICK JUHASZ
The eyes of the seismological and environmental worlds have focused on Wayne National Forest this week, the sight of a 3.0-magnitude earthquake on Sunday. For now, fracking operations in the forest have stopped.

The earthquake's epicenter was not within any of the forest's recently leased parcels, but it was located in and near parcels that have been requested for future lease opportunities by private drilling companies. (See the map below.) 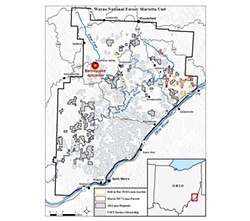 OHIO ENVIRONMENTAL COUNCIL
In all, some 40,000 acres of the forest have been earmarked for private natural gas drilling — some of which was formerly federal land sold off by the Federal Bureau of Land Management.

“This earthquake is a clear example of the risks involved in fracking,” said Melanie Houston, the director of the Ohio Environmental Council's oil and gas team, in a public statement this week.

Highly fracked eastern Ohio counties, like the Wayne's Monroe County, are increasingly affected by earthquakes — in alarming contrast to the rest of the state. FracTracker maps seismological data, and the correlation is hard to ignore.