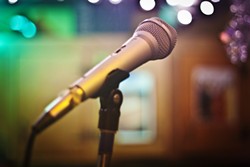 Alex Bellink
ASCAP identified Willoughby Brewing Co. this week as one of nine bars and restaurants "nationwide" that is broadcasting or playing copyrighted music with neither permission nor payment.

ASCAP is one of three main performing rights organizations (PROs). They're the middlemen between songwriters and platforms that broadcast music (radio stations, Pandora, sports arenas, restaurants, etc.). "The songwriters who write the music really depend to a very significant degree on royalties from public performances of their work," Jackson Wagener, ASCAP's VP of Business and Legal Affairs, tells Scene. "That's something that often gets overlooked."

In the case of Willoughby Brewing Co., they had stopped paying their ASCAP fees a few years back. Wagener says the organization contacted them dozens of times to sort out the issue before terminating their license in May 2016. From that point to the present, a copyright infringement claim could be placed anytime a band performed a song written by one of ASCAP's 600,000 or so members.

That's what happened in December 2016, when ASCAP sent an independent investigator to the brewery to find out if they were still dipping into the ASCAP library. The investigator found three violations: performances of "I Will Survive," "Just What I Needed" and "Play That Funky Music White Boy."

Wagener says that Willoughby Brewing Co. paid its unpaid dues up to May 2016 on Wednesday — the same day the civil complaint was filed. He's hopeful that that indicates an amicable settlement. As of now, Willougby Brewing Co. remains unlicensed by ASCAP. "When you're using someone's intellectual property, it's really the right thing to do to make sure they get paid," he says.